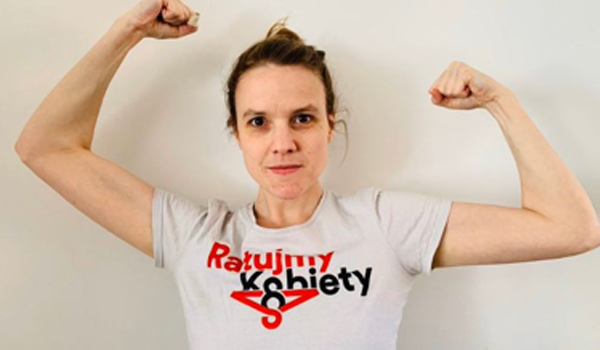 If this bill comes back again and again,

Our response stays the same:

Our bodies, our rights.

Support the great women in Poland fighting this backlash.

The Polish Parliament is taking advantage of the lockdown to try once again to pass its “Stop Abortion” bill on 15-16 April, to criminalise the few remaining legal abortions left in the country, as well as pass the so-called “Stop Paedophilia” bill to criminalise sexuality education and make it illegal for medical professionals to prescribe contraceptives for under-18s. They chose a moment when “the free movement of persons and freedom of assembly are gravely limited on public health grounds, so that protests against the bills cannot happen on the streets”, reports the Federation for Women and Family Planning. Both bills were first tabled in 2017; widespread protest prevented their passage then. Now they’ve been taken out of the freezer.

The Stop Paedophilia Bill says that any educator, teacher, tutor, midwife or doctor could be imprisoned for talking to young people about birth control and safer sex or prescribing contraceptives to anyone under the age of 18. On 9 April, the Ponton Groupcalled it “a shameless, deceitful attack on the basic rights of young people living in Poland. If it is passed, young people will be effectively deprived of comprehensive gynaecological care and lose an important means of gaining knowledge about their own sexuality, their own bodies and their own health. It would also inevitably lead to a dramatic surge in cases of sexually transmitted infections, as well as it would deny any help to those who have been sexually abused.” The Astra Networkhave published a statement of solidarity in response to this attack.

Euronewsreported on 12 April that car, bicycle and supermarket protests are planned– while of course adhering to social distancing rules.

On 14 April, a statementcirculated by Center for Reproductive Rights Europe and signed by more than 100 signatories called on the Polish government to reject these regressive legislative proposals because they violate the right to life, health, non-discrimination and equality, privacy, information, education, and freedom from cruel, inhuman or degrading treatment. It supports the numerous international human rights mechanisms who have repeatedly called on Poland to reform its abortion law to ensure access to safe and legal abortion and to remove all barriers to abortion care. It also calls on Poland to provide mandatory, age-appropriate, evidence-based and scientifically accurate comprehensive sexuality education across the education system.