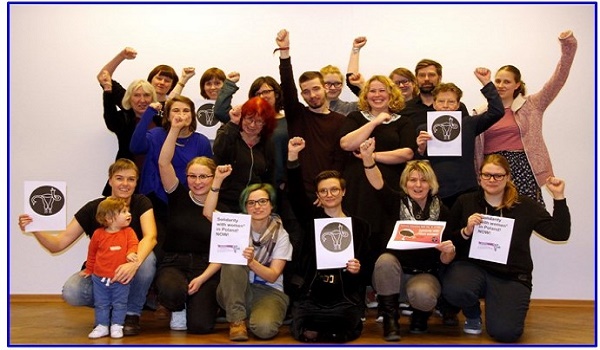 On 14 March, the Polish Bishops’ Conference issued a communiqué, requesting the Law and Justice Party (PiS), who are the government party in parliament to immediately start processing the pending draft bill in the Polish parliament, which prohibits abortion on grounds of fetal anomaly, even when the fetus is irreparably damaged. Without even pretending that the Polish state is in any way independent from the church, PiS decided that this bill – which aims to force Polish women to give birth to fetuses unable to live independently – would go to the relevant commission in the lower chamber for debate on 19 March, with a vote no later than 23 March.
In Poland, abortion is illegal with three very narrow exceptions – when it is a result of a crime (rape or incest), when it causes danger to the women’s life and health, and when fetal anomaly is incompatible with life. However, the so-called “conscience clause” that puts the personal religious beliefs of doctors above their professional duty to practice medicine, makes legal abortion even on these grounds barely available in Poland. So the consequence of this action will in fact make abortion 100% unavailable in Poland.
That is why the national coalition, Polish Women’s Strike, together with pro-woman organisations and movements, prepared a #SundaySermon action on 18 March outside the 14 archidioceses and 27 dioceses across Poland. They called on people to bring a #HangerForABishop – metal clothes hangers that have long been a symbol of illegal and dangerous abortions.
Polish Women’s Strike have nothing against religion and its believers. However, they consider the Church: “an oppressive institution, whose dictatorship they have endured for a long time and a source of hatred, contempt and violence against women. An institution for which falsely perceived ‘tradition’ and ‘morality’ are more important than the fact that we are raped and killed every day. In our own homes. In the name of the sanctity of an unresolvable marriage. An institution which will not rest until it turns our lives into an ultimate hell. We are to live in pain, give birth in pain and die in pain. Enough of this!”
Their statement continues: “When after the first Polish Women’s Strike on October 3, 2016, PiS withdrew the project of a total abortion ban, we were informed that ‘the Episcopate authorised the Deputies to withdraw the project’. So we will not pretend that we do not know who is in charge here!”