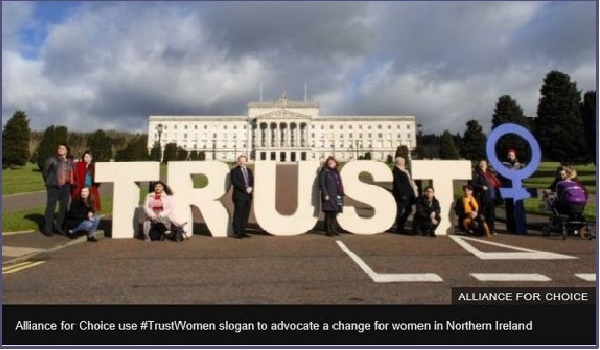 As in Ireland up to now, it is almost impossible to get an abortion in Northern Ireland. The most immediate fallout of the Irish referendum results on 26 May was the call from many quarters for Northern Ireland to be next. However, there are complex political realities that will get in the way. The first and most important is that policy on abortion was devolved by the UK Parliament to Northern Ireland and Scotland some years back, as part of changes introduced by the then Labour government to give Scotland, Wales and Northern Ireland more local control over a range of issues.

The problem now is that Northern Ireland hasn’t had a functioning government for more than a year, so there is no way it can act. Secondly, there is no guarantee its government would reform the abortion law even if it suddenly got back on its feet. One of the strongest and most reactionary Northern Irish parties, the Democratic Unionist Party (DUP), is dead set against legalising abortion. Moreover, they currently have a controlling say in the politics of the UK overall, because the Conservative Party does not have a parliamentary majority, and they made a deal with the DUP last year after the election to support them to get unpopular legislation through.

Hence, calls by MPs for the Westminster Parliament to change the law in Northern Ireland have been met with point-blank refusal by Prime Minister Theresa May. And she has more reasons than just keeping the DUP on side. Ignoring the devolution agreement would threaten the Good Friday agreement, which brought peace to Northern Ireland and is at risk because of Brexit. So although a long list of members of the UK Parliament have signed a letter to Mrs May asking her to do the right thing, she will continue to insist her hands are tied.

The other call being made is to hold a referendum in Northern Ireland on abortion, based on recent opinion polls that show a majority of the population supporting abortion law reform to a greater or lesser extent, that is, at least on some grounds.

But referendums are not required to change the law in the United Kingdom, and in my opinion they should never become so. We have learned to our great dismay in the UK that a referendum, even one with a slim majority, is treated with the same reverence as the ten commandments as handed down to Moses, and heaven forbid anyone should criticise let alone reject the outcome because they are at risk of being hung. Even when the referendum result is causing political, legal and economic chaos, loss of jobs, destruction of rights, reduction of standards, and much more in its wake, as Brexit is. In any case, you might ask, without a government, who in Northern Ireland could call a referendum? Under what is called the Sewel convention, the UK government has agreed that it will not normally legislate on matters that are the responsibility of devolved administrations without their consent.

Even so, the answer to this last question seems to be – the Westminster Parliament should do it. That way, it is thought, it would put the decision into the hands of the people of Northern Ireland even if it was launched from Westminster. The referendum idea has been taken up by a number of Conservative MPs at Westminster, and by Breedagh Hughes, NI regional director of the Royal College of Midwives, a staunch campaigner for women’s rights. She was quoted in the Guardian on 27 May as saying no one was speaking up for the pro-choice majority in Northern Ireland at present and the only way to give them a voice was through a referendum. Unite, one of the largest trades unions representing workers in Northern Ireland, also supports it. But in response, a source speaking for Theresa May was reported to say, once again, that this should be matter for the Northern Ireland executive.

In any case, there is the vexing question of what the referendum question would be. The Irish referendum question on the 8th Amendment was a straightforward one, “repeal – yes or no?” The hard part starts now that there is going to be actual law reform. Every aspect involved, every shade of political difference, and all the conflicting interests that exist will now enter the room. Achieving consensus that doesn’t punish women on what the new abortion law should be may be the goal of some, but it will not be so for everyone. Similarly, being able to achieve consensus even on what a referendum question should be for Northern Ireland must surely be equally difficult. And in the end, a referendum does not change the law, only test the waters.

Westminster Labour MP Stella Creasy said on 29 May in The Times that the British government should step in to ensure that the British abortion law applies in Northern Ireland just as much as it does in Scotland and Wales. Some 160 British MPs have backed her in a letter. She is thinking of tabling an amendment to the domestic violence bill, but again, under the Sewel convention, that may be ruled inadmissible. Dawn Butler, the shadow Minister for Women and Equalities, said Labour would be investigating what legislative options it could use to ensure Westminster MPs did get a vote on this.

Leo Varadkar, the Irish Prime Minister, told the Guardian on 29 May that he couldn’t see why women from Northern Ireland would not be able to have abortions in the Republic of Ireland once the new law is introduced there.

Meanwhile, in Belfast on 31 May, women demonstrated in front of the crown and the high courts with a banner that said: “We won’t be left behind!” Women on Web sent drones from the Netherlands with packets of medical abortion pills. Several women took a pill in front of the media. There was a large police presence; they questioned the women but did not arrest them, and they stopped campaigners from handing out abortion pills to anyone else. They also confiscated the WOW drones. Watch the video. Sky News, who published the video, asked: “Is the law now unenforceable in Northern Ireland?” See the Belfast Telegraph, 31 May, for fantastic photographs and a report.

On 31 May, an email was circulated by BPAS, FPA, Amnesty International, NI Alliance for Choice and a large number of NI organisations (unnamed) calling for repeal by the Westminster Parliament of Sections 58 & 59 of the 1861 Offences against the Persons Act. This is a UK-wide 19th century law that criminalises women who have abortions and any one who provides abortions outside the terms of the 1967 Abortion Act in Great Britain. It also still applies in many former colonies. The argument is that this would benefit not only Northern Ireland but the entire United Kingdom because it would decriminalise abortion altogether, and that is absolutely right. And, they say, it would still allow Northern Irish health bodies, or a new NI government, to create a Northern Irish framework of their choosing. But Theresa May is still in charge, even if this appears to be a whole new ballgame. On the other hand, there may just be enough of a mood for change in Westminster to make it happen. Let’s hope for miracles!

And we must not forget that a judgment is pending from the UK Supreme Court as to whether the current abortion law in Northern Ireland breaches the European Convention on Human Rights. The appeal was brought by the Northern Ireland Human Rights Commission. The judgment was initially intended to be made public on 23 May. Perhaps they thought they had better wait and see what happened on the 25th. Will the outcome have altered the judgment? We may never know, but for now, my money is on the Court.