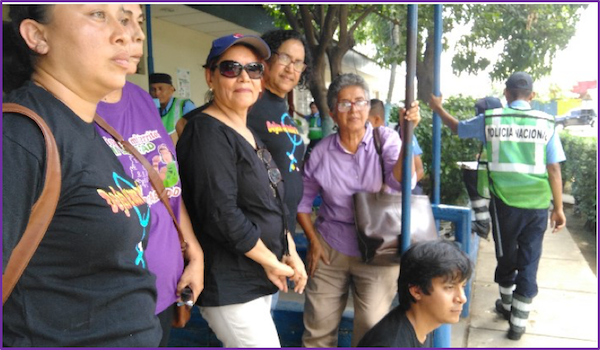 On 28 September, International Day for the Decriminalisation of Abortion, defenders of human rights protested in front of the National Assembly of Nicaragua, demanding that the Nicaraguan state allow women to exercise their right to decide over their own bodies.

They symbolically spilled red paint to signify the blood of those women who have died because they did not have access to a safe abortion, many of them with serious medical complications. Among the defenders were feminists Celia Contreras, Luisa Molina, María de Jesús Tenorio, Jessica Hernández  y Patricia Orozco. Giving coverage of the activity were Duyerling Rivers and Abixael Mogollón, journalists from OndaLocal.

All of a sudden more than 20 policemen appeared in two vans and on several motorcycles. They took many photographs and asked for documents about the van the group had come in, and also for the identification papers of the activists, and then arrested them. At the same time as the arrests, Abixael Mogollón was handcuffed and taken away from the rest of the group because he was taking photographs of the arbitrary and illegal arrest of the activists. Several men in civilian clothes took photographs of Mogollón and commandeered his cell phone, identification papers, and other personal items.

Then both the journalists and defenders were transferred to the District One station of the National Police in Managua, where they were detained for more than an hour. They were subsequently released without even the offer of an explanation for the detention.

Patricia Orozco said in front of the media that what they did was an act of intimidation against those who demand their rights. “It has already been ten years since the reform of the Penal Code, which penalized all abortions, with the full support of the Frente Sandinista,” she said.