Home » News » TUNISIA – Sexual and reproductive rights in Tunisia: not for all, not everywhere 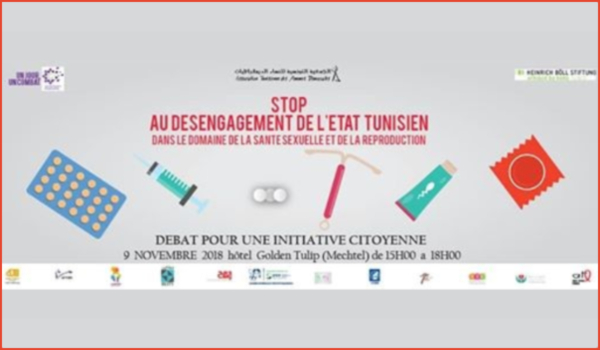 The denial of sexual rights

Wahid Ferchichi, representing ADLI, stressed the lack of knowledge of ‘sexual rights’ in Tunisian law. “This right is often thought to be covered by the phrase ‘reproductive and sexual health. However, this excludes sexual rights from the right to health. And we also exclude some sections of the population.” Ferchichi points to the recent order issued by the Ministry of Health regarding the requirement to report pregnancies and births outside marriage, or that relating to access to HIV treatment, which excludes foreigners with the exception of pregnant women, but only until delivery.

This exclusion also affects the LGBT community, says Alaa Saibi de Mawjoudin. She reported the results of a survey of the LGBT community by Damj, Chouf and Mawjoudin. This revealed that “about half of the respondents do not go to the doctor or do not do have medical tests because they fear mockery or abuse by medical staff in connection with their practices or their minority identity”.

The threat to Tunisian services

Recent months have been marked by shortages of various contraceptive methods. Yosra Frawes, the president of ATFD, sees this as a policy that jeopardises access to sexual and reproductive health services for all women.” Women’s advances are threatened, and it has worsened under the leadership of the Minister of Health Imed Hammami,” she says.
Since the early 2000s, Tunisia’s economic policy has resulted in budget restrictions, including on abortion services, which have been replaced by medical abortion, which is less expensive. This policy has led to another phenomenon; since 2014 it has been observed that some public sector doctors have mobilised to prevent access to abortion on grounds of conscientious objection, as a way to refuse provision of abortion care, and this without including those in the private sector.The ATFD is concerned about the Ministry of Health’s inaction, and says that if conscientious objection is an individual right for doctors, there is also an obligation to refer women to those providing abortion.
Hafedh Chekir, an expert in demography, explains these phenomena by changes in the staff at the National Office of Family and the Population, who used to be more activist than now.
It was also noted that in some hospitals and university hospital centres, abortion has become a fee-paying service, under the pretext of reform, which excludes women who cannot afford to pay.
The ATFD warned that the consequences were a decrease in contraceptive prevalence from 63.5% in 2006, to less than 60% in 2016, and an increase in the fertility rate from 2% in 2007 to 2.4% in 2017.

This article is very important as it alerts us as to how changes in the political environment to a more conservative mindset can adversely affect a very good, efficient reproductive health programme that has been in existence for more than four decades.

As a health professional, I would just like to clarify that the introduction of medical abortion in Tunisia brought significant progress for women. It offered a safe and efficient modern method of abortion to all women. It does not replace the surgical method, but it gives an even better alternative.