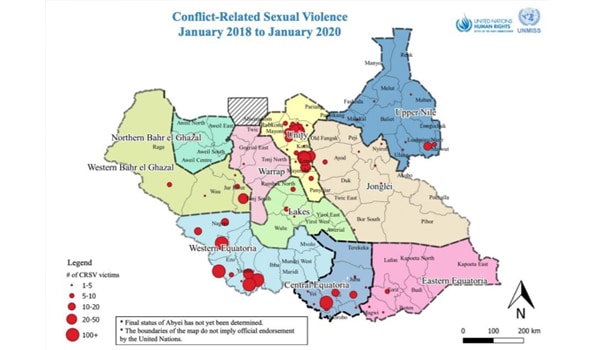 “The study found that funding for public health care in South Sudan has not been prioritized, with just 1.2% (USD 14 million) of the national budget allocated for this purpose. This has resulted in international organizations using donor funding to try to fill the gap. Despite the enormous financial investment, the medical response for survivors of sexual violence remains weak.

“The report found that there is, on average, only one health facility per 10,000 people and an estimated 72 percent of the population live more than 5 km away from their closest clinic. Many of these facilities are not capable of providing specialized care and there are not enough qualified doctors, nurses or midwives to treat sexual violence survivors.

“These factors have resulted in many victims not seeking assistance until they develop complications, such as sexually transmitted infections, unwanted pregnancies, and problems from unsafe abortions. Stigmatization, coupled with the risk of being labelled a sexual violence survivor if they seek health care, has also forced many to suffer in silence.

“One 47-year-old victim told human rights officers how she felt lucky to even be alive after being gang-raped by armed men in 2018: ‘I am lucky because I am healthy now. Last year, two women and one girl were gang-raped by armed men. One of the women and the girl returned to the village after the incident. The other woman…never visited the hospital because of shame. She became very ill and passed away last month. Her relatives told me she died of an illness that was caused by the rape. The other two survivors have also passed away.’

“The report documents 356 incidents of conflict-related sexual violence, including rape, that took place between January 2018 and January 2020. These incidents involved at least 1,423 victims, including 302 children. Those responsible for the violence included government and opposition forces, as well as youth militia used by the parties to the conflict….”