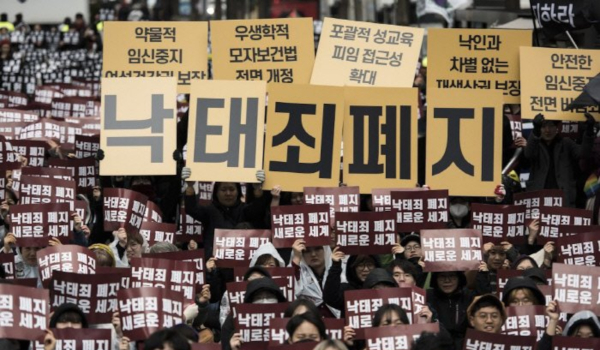 Since 6 April, some 60 pro-choice activist groups have been rallying in central Seoul, as have some 40 anti-abortion groups. Although a large majority in a recent survey of 10,000 people supported legalising abortion, not everyone agreed. In 2017, a high school student told a rally in Seoul she had been forced to end her education after having an abortion. “My teacher told me if I don’t leave school, he’d report me to the legal authorities,” she said. “He said I’d committed a sin because I fell pregnant as a student.”

“Today, finally, the Constitutional Court announced that the hearing date on the constitutionality of the abortion law will be the 11th of April. Joint Action for Reproductive Justice and many others have been organising people to join the picketing action in front of the Constitutional Court since 29 September 2018 (the day after International Safe Abortion Day), and we held a big rally on 30th of March 2019. On the day of the hearing, we will hold a press conference in front of the Court with many social movement organisations from every field from 9 am until the decision is announced. Then we’re going to hold a rally near the Court.We are sure that the judges are feeling the burden of having to decide what is “constitutional” once again.”

The Constitutional Court upheld the 70-year-old ban on abortion in 2012, saying in its decision that abortion would “end up running rampant” if not punished. But according to the HuffPost, both public opinion and the makeup of the court have shifted since then, with the court moving in an increasingly progressive direction as justices retire and are replaced, raising expectations in legal circles that this ruling could be different. Six of the nine judges needed to vote against the current abortion law for it to be deemed unconstitutional. And they did – today, 11 April in the afternoon!!
SOURCES: VOA News, by Juhyun Lee, 11 April 2019 ; Joint Action for Reproductive Justice, E-mail, 8 April 2019 ; MedicalXpress, by AFP, 9 April 2019; HuffPost Korea, by Seungho Baek, 28 March 2019 ; Korean Times, by Kim Hyun-bin, 19 March 2019 PHOTO 1:ⓒ Hee-ji, Kim ; PHOTO 2: VIDEO: Showing pro-choice action for abortion rights every month for the past year