Home » News » SOUTH KOREA – A debate, a rally and other activities in support of abortion law reform 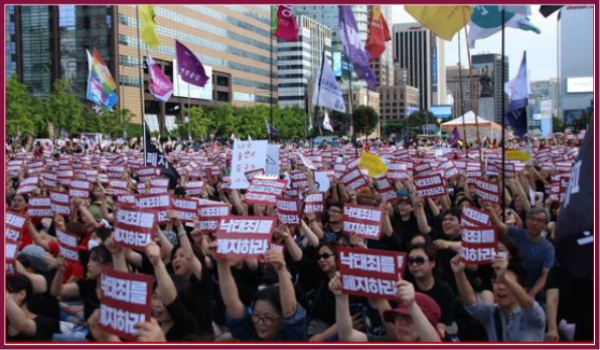 Amid what the Korea Times called “heated public discourse inching towards greater rights protection for women’s autonomy”, Dr Yoon Jeong-won, Head of Women’s Affairs of the Association of Physicians for Humanism, said, at a forum at the National Assembly building on 5 July, entitled “From Illegal Abortion to Reproductive Health”, that Korea should legalise abortion and guarantee women’s health rights by widening abortion choices such as approving the abortion pill. The forum was organised by the Center for Health and Social Change and Joint Action for Reproductive Justice. The Justice Party, one of the parliamentary parties, supported the forum and some members of Assembly attended. Rebecca Gomperts from Women on Waves also spoke. 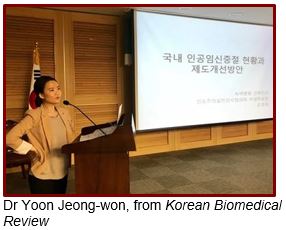 The next day, they showed the film about Women on Waves, and Na Young from the Network for Glocal Activism talked about the political and social contexts of the Korean anti-abortion law, the social situation of women seeking abortions in various circumstances, and introduced the reproductive justice movement that has developed over the past year and more. Rebecca Gomperts also gave a presentation.

Then on 7 July, as many as 5,000 people attended a rally against South Korea’s current restrictive abortion law in Gwanghwamoon, one of the main streets of Seoul. Members of the Justice Party, Green Party, Revolution Party and trade unions joined this rally. Before the march, a teenage woman, university student woman, a woman in her 50s, a woman with a disability, a sex worker woman, a woman believes in Catholic, a doctor, a single mother, and a woman worker shared their experiences and spoke from the stage. Many feminists and activists sent solidarity messages by letter and video, including Susanna Camusso from the Italian General Confederation of Labour; Civia Tamarkin, the writer and director of “Birthright: A War Story” who sent the video; Indigenous Feminists and feminist activists from Mexico; and Alejandra Angriman, Secretary of Gender of the Central de Trabajadores of Argentina. A solidarity letter from the International Campaign was translated into Korean and shared.

On the march, the participants carried signs that read, “It is a woman’s right to terminate a pregnancy,” “Women are not reproductive vehicles,” and “We denounce the government’s attempt to control women’s bodies.” They also sang a Christian song with revised lyrics: “My life and my professional career are bound to be in tatters if I have babies indiscriminately. It’s my body that wears out. It’s me that gets blamed. Abolish abortion ban. We will triumph.” Many demonstrators marched along the street from the square to Anguk Station near the court chanting slogans such as, “Abolish abortion ban that poses threat to women’s right to health.”

The South Korean Ministry of Health and Welfare estimated that in 2010, about 168,000 abortions took place, but doctors think the number is at least 500,000 and as many as 800,000. A survey this year by the Korean Women’s Development Institute, on “Women’s perception of pregnancy discontinuation and their experiences,” found that most abortions are requested on socio-economic grounds. It found that 41.9% of those who had experienced pregnancy had an abortion, but only 2.9% of them had a legally accepted reason for abortion. Of those without a legal reason, 29.7% said they sought an abortion because they were not economically ready, and 20.2% said they had to continue study or work. Dr Yoon pointed out that making abortion illegal creates an environment where safe abortions cannot take place, which exacerbates the harm to the women’s rights to health and their socioeconomic problems. Although the World Health Organization has not recommended curettage for abortion for decades, 46.6% of abortions involved curettage in Korea, according to a report released in 2005.

After all these activities, some National Assembly members contacted the organisers, who are still fighting and gathering support from more organisations. The Constitutional Court and the government had so far not made statements as of 19 July.