Information helplines and hotlines have probably been around for as long as there have been telephones. If you put the word “helpline” into Google, the pages fill up with different helplines – for young people, preventing youth suicide, giving help with depression, mental health problems, eating 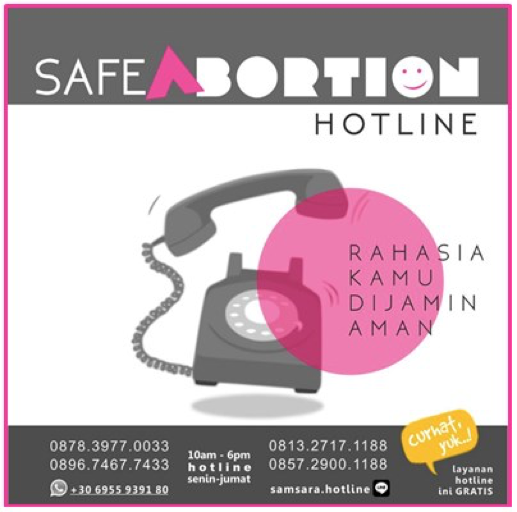 disorders, addiction. If you put in women’s helplines or helplines on women’s health, you find ones on domestic violence and abuse, urinary incontinence, menopause, sexual health and sexuality issues, and family planning. If you put in abortion hotline or 24-hour abortion helpline, helplines in several countries pop up – Canada, Australia, USA, UK. An anti-abortion one too. And when you put in “safe abortion information hotlines”, up more of us came – Women on Waves’ and Women Help Women’s hotline information pages, and a 2015 news article about Latin America’s safe abortion information hotlines, as well as links to several national hotlines, e.g. in Argentina, Venezuela, Chile, Pakistan, Indonesia, Philippines.

Among some impressive helplines from several decades ago, TARSHI in India stands out, and is still there and going strong today. TARSHI stands for Talking about Reproductive and Sexual Health Issues. It was founded in 1996 and describes itself like this:

“TARSHI works towards expanding sexual and reproductive choices in people’s lives in an effort to enable them to enjoy freedom from fear, infection and reproductive and sexual health problems. TARSHI’s work on sexuality is from an affirmative and rights-based perspective, a fresh change from perspectives that often restrict sexuality within a disease prevention, violence against women, or sexual minorities framework.”

Why so many helplines?

Here is how a journal article about the helpline 181 Abhayam, also in India, that offers help with gender-based violence, explains it:

Many women who experience gender-based violence may never seek any formal help because they do not feel safe or confident that they will receive help if they try. A public-private-academic partnership in Gujarat, India, established a toll-free telephone helpline –called 181 Abhayam – for women experiencing gender-based violence. The partnership used existing emergency response service infrastructure to link women to phone counselling, non-governmental organizations (NGOs) and government programmes. In India, the lifetime prevalence of gender-based violence is 37.2%, but less than 1% of women will ever seek help beyond their family or friends. Before implementation of the helpline, there were no toll-free helplines or centralized coordinating systems for government programmes, NGOs and emergency response services. In February 2014, the helpline was launched across Gujarat. In the first 10 months, the helpline assisted 9,767 individuals, of which 8,654 identified themselves as women. Of all calls, 79% (7,694) required an intervention by phone or in person on the day they called and 43% (4,190) of calls were by or for women experiencing violence. Despite previous data that showed women experiencing gender-based violence rarely sought help from formal sources, women in Gujarat did use the helpline for concerns across the spectrum of gender-based violence.

During the height of the HIV epidemic, there were many HIV helplines set up in many countries. An article published in 2011 reported a study on the users and utility of an HIV/AIDS helpline in the ASHA Foundation in Bangalore, India. The study was to determine the characteristics of those who accessed the HIV/AIDS helpline, the reasons for calling the helpline, and any gaps in service provision. Two years of calls between January 2007 and December 2008 were analyzed. The majority of callers were men aged 20-39 years and educated. The most common reasons for calling the helpline were for HIV testing, information about HIV and AIDS, condom use, care and support services and referrals to other services. Younger callers were more concerned with risk; older ones to learn about care and support services.

In 2002, a UNAIDS Best Practice Collection Case Study in 2002 highlighted four AIDS information helplines that illustrated best practice as regards counselling and creative approaches to meeting the challenges they faced: the AIDS Helpline of South Africa’s Department of Health; TARSHI in India; the National AIDS Hotline of Trinidad and Tobago; and the hotline run by Remedios AIDS Foundation of Manila, in the Philippines.

Lastly, many helplines exist for children, for example to help to protect children from school violence. Plan International wrote a report in 2011 on data collected across four countries (Zimbabwe, Paraguay, Sweden, Egypt). It documented that child helplines are in a unique position to help fight violence and abuse in schools because they allow children to reach out when they need it, in real time and directly, to speak with someone in a safe, trustworthy environment. The study found these calls are often young people’s first contact with any kind of child protection service, serving as a gateway to a world of help and support. In 2010 alone, child helplines in the CHI network received more than 14 million contacts.

In the last decade, safe abortion information helplines have evolved as a successful strategy to share information about how to have a safe abortion using medicines (mifepristone and misoprostol) and as a vehicle for social change. The model of telephone helplines has spread quickly, and some 20 telephone hotlines, operated locally under the leadership of local activists, have been established in Africa, Europe, Asia, and Latin America. The global online service and email helpline Women Help Women works hand in hand with local hotlines and shares the vision for change.

The helplines’ goals are to reduce maternal mortality and build social support for women’s rights and decriminalization of abortion. They provide a timely and practical answer to the growing demand for reliable information about how to use and how to obtain the medicines. As locally-owned initiatives led by lay community health workers, the hotlines constitute a powerful voice for women’s reproductive and human rights, and bodily autonomy.

The meeting provided a safe space for learning, experience sharing and strategizing for next steps together. Topics discussed included: newest evidence-based protocols and recommendations of the World Health Organization (including task-shifting), technological tools and solutions such as phone apps and text systems, as well as issues such as research priorities, best practices in counselling, institutional capacity building and networking.

New collaborative projects have been initiated, including creating joint platforms for data collection and scientific research, as well as referral systems between hotlines and the online services of Women Help Women.

The helplines are creating a joint global platform as they continue towards common projects aimed at improved security, significantly expanded outreach, and research to document the dramatic impact of the model on women’s health and rights.

LINK TO THE LIST OF SAFE ABORTION INFORMATION HOTLINES