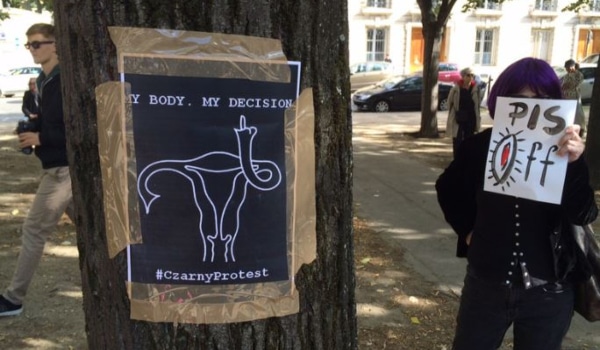 Anna (a pseudonym), aged 39, qualified for a legal termination under Polish law, but a woman needs a doctor to write a referral: “Many won’t,” she said, “either because they signed a conscience clause that they won’t perform abortions, or don’t want any trouble. There was a real chance of going one hospital to another, passing banners with chopped up foetuses on my way, hoping someone would take pity on me. Hoping that the nurses wouldn’t let me know they think I’m a murderess. I couldn’t imagine going through that. I went to Germany, to a small town near the border. There were 10 people in the waiting room, a lot of young girls, but those my age too. All Polish. The procedure took 15 minutes. Physically I was relieved, but mentally I was broken. Not because of any sense of guilt – only sadness and despair.”

In 2010, around 15% of these abortions took place abroad, but this figure may have risen to 20% by now, according to theFederation for Women and Family Planning. Destinations include Ukraine, Austria, Germany, Belgium, the UK and Slovakia. The only other option, apart from the backstreets, is to import abortion pills from abroad, which is illegal.

In Berlin, the organisation Ciocia Basia was set up in 2015 to help Polish women access abortions in the German capital. “We are seeing an increase in women who should be able to get abortions in Poland legally,” says Alex, a volunteer at Ciocia Basia. “Right now, the rough estimate is that this is 10–20% of cases – usually as a consequence of rape or malformation of the foetus.”