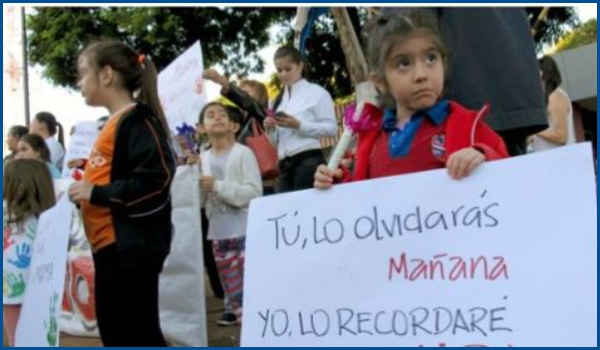 … since we published the photo above, taken during a protest against a case that has come back into the news this week. Along with human rights and women’s groups across Latin America in 2015, we joined the chorus of voices condemning the government and a hospital in Paraguay for refusing to allow a 10-year-old child who had been sexually abused by her stepfather to have an abortion. When the girl’s mother took her daughter to hospital suffering from stomach cramps and vomiting, she did not realise the girl was more than six months pregnant. et she was arrested and imprisoned for supposedly allowing the abuse to happen, and only after the girl had delivered was she released with all charges dropped.

At the time, a board of doctors, psychologists and psychiatrists examined the girl once the pregnancy was identified, and warned she was at risk of post-partum haemorrhage and endometrial infection as well as damage to her undeveloped reproductive health system. However, despite the risks of carrying the pregnancy to term at such a young age, and despite the fact that abortion is legal in Paraguay if the girl/woman’s life is at risk, the hospital kept the girl like a prisoner until they finally agreed to induce labour early, admitting only at the last minute that forcing the pregnancy to go to term was life-threatening. Then she was forced to breastfeed.

The girl whose case travelled around the world in 2015 now has a four-year-old daughter. Today, aged 14, she suffers chronic pain in her hips and waist. More painful still are the psychological scars. Her mother told the Guardian that her daughter’s child is a constant reminder of the traumatic end to her daughter’s own childhood. The girl takes pills against depression, sleeping pills to be able to sleep, has talked about suicide and regularly self-harms, said her mother.

Rampant child abuse, a culture that sexualises young girls and highly restrictive abortion laws have contributed to a child pregnancy rate in Paraguay that is among Latin America’s highest. At the time this case came to light, much of the attention was focused on condemning the widespread sexual abuse in the country. Fewer voices called for pregnant children to be permitted an abortion no matter when the pregnancy was discovered. In 2015 it was reported that about 600 girls aged 14 or under become pregnant each year in this country of 6.8 million people. Also in that year the UN reported that in Latin America, in particular, the risk of maternal death was four times higher among adolescents under 16 years old with 65% of cases of obstetric fistula occurring in the pregnancies of adolescents. In addition, these pregnancies are also dangerous for the babies with a mortality rate 50% higher. And according to UNFPA data reported in 2015, in  Paraguay 2.13% of maternal deaths are in 10-14-year-old girls, while two births a day are to 10- to 14-year-old girls.

Has anything changed? In March this year, 3 girls in Paraguay aged 10,14 and 16 died, two of them in childbirth. One woman who works in a shelter for girl-mothers is quoted as saying: “We feel genuinely comforted that 213 babies saved from abortion have passed through here,” said Rosa. But the case of a girl aged 14 who died in childbirth following sexual abuse by a 37-year-old man and other cases of sexual abuse that made the news have led to legislation to help prevent sexual abuse being brought before the congress in July but clauses on sexuality education were blocked by conservatives. The government has increased the number of drop-in teenage health centres from eight to 21. But that is unlikely to help girls aged 10-14.

In May, the secretariat for children and adolescents launched a 15-day media campaign under the slogan “Niñas, no madres” (Girls, not mothers), a campaign being promoted across Latin America by CLACAI. But their budget is limited, acknowledged Eduardo Sosa, an official with the secretariat for children and adolescents. As for abortion, “as long as it’s not permitted by the constitution, we’re not allowed to discuss it,” he added.