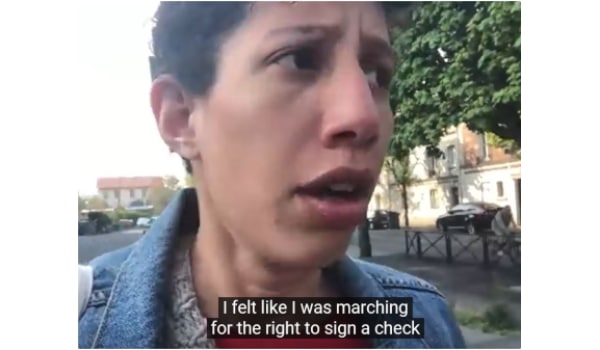 MALI is a feminist, universalist, secularist and pro-choice movement fighting for abortion rights. MALI held a protest action in Rabat in the evening of 24 April 2019. A French web TV station was there to film it as part of the 6th episode of a video series entitled “L’IVG c’est sacré” (Abortion, it’s sacred), made by a group of young women called Clit Revolution, who come from a number of different countries.

The MALI protest was against the failure of the parliament to reform the abortion law. They went at night to the Ministry of Health in Rabat, and put sanitary pads covered in slogans about abortion and with fake blood on the walls of the Ministry as a symbolic protest. The sanitary pads contained feminist messages such as: “My body, my rules,” “My vulva, my uterus, my decision,” and “The right to abort is a fundamental freedom.” A night guard took them down almost immediately but at least they were filmed first. There was also an interview with Betty Lachgar of MALI and comments from the group about the situation in other countries too.

The slogan of the protest was Mon Corps, Mes Règles (My Body, My Rules). (Règles means both menstruation and rules in French).