Home » News » Medical Abortion: What is it and how is it used

The following information is based on parts of this handbook, but it is written for women and safe abortion advocates too.

Some of the advantages of medical abortion are that it avoids a surgical procedure, it is like having a spontaneous miscarriage, the pills are used by the woman and the abortion can safely take place at home through 10 weeks of pregnancy. After that, it is safer to use this method in a clinical setting, especially in the second trimester of pregnancy (from 13 weeks), but although the handbook doesn’t say this, some women have no choice and they manage at home.

The disadvantages of medical abortion are that it takes from several hours to several days for the abortion to be complete, while vacuum aspiration abortion (a simple surgical method, also recommended by WHO) only takes a few minutes. In addition, the blood, fluids and tissue that are collected with an aspirator during vacuum aspiration must come out naturally with medical abortion. Most of the bleeding is within the first 1-2 days, but it may continue for some days or even a couple weeks after that. The misoprostol causes cramping as it makes the uterus contract, and it can also cause nausea and vomiting.

Both medical abortion and vacuum aspiration cause pain, which can be controlled with simple painkillers; non-steroidal inflammatory drugs such as ibuprofen are recommended. Medication for nausea can also be taken.

As we reported last week, based on the new WHO guideline on health worker roles in providing safe abortion care, most evidence-based interventions for safe abortion and post-abortion care in early pregnancy, including medical abortion, can be provided at the primary health-care level and by a wide range of non-specialist providers.

It is always best to have the support of a health care provider for abortion. Although serious complications are rare, they do happen, e.g. incomplete abortion or very heavy bleeding, and women may need access to medical help. However, there is evidence that women have safely used medical abortion without clinicians in many countries, safely and effectively. 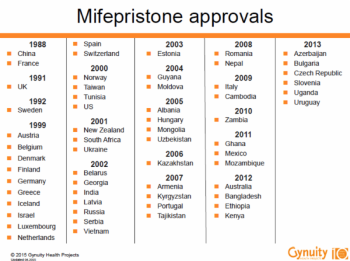 When women have no other option, they are turning to Safe Abortion Information Hotlines in their countries for information and support where these are available. Alternatively, through the internet, women are contacting one of two trusted sources of information and support in obtaining medical abortion pills on their own –Women Help Women or Women on Web. Both groups give accurate information to women in a number of languages, there will be a web-based consultation with a qualified health professional, women can obtain a prescription for the pills they need, and they can request support during the process or afterwards.

The following information is available from the two WHO publications above. Pregnancies are dated in days or weeks starting from the first day of the woman’s last menstrual period. Hence, by the time a woman misses her period, she will be about 4 weeks (± 28 days) pregnant.

Over 24 weeks, the dose of misoprostol should be reduced, due to the greater sensitivity of the uterus to prostaglandins. The lack of clinical data up to 2012, when this guidance was published, meant WHO did not make a dosage recommendation.

If mifepristone is not available, misoprostol can be used alone, but it is not as effective.

If the pregnancy was 13 weeks or less, either vacuum aspiration can be used or a single dose of misoprostol is recommended, either 400 mcg sublingually or 600 mcg orally.

We urge all women to seek information and support -and the medications themselves- from a trusted source if they have an unwanted pregnancy and need an abortion. If there is no one close to home, contact: