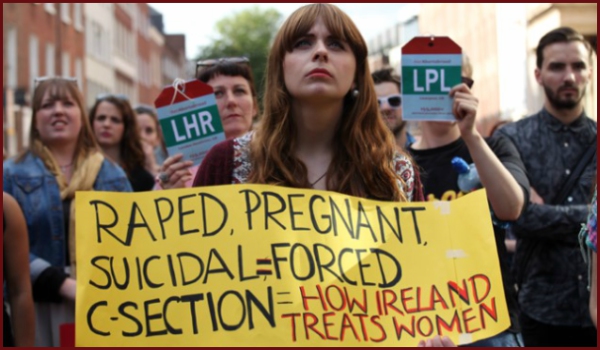 The Health & Safety Executive (HSE) of Ireland has acknowledged liability and said it is willing to compensate a young woman known as Ms Y for failing to ensure she was provided with an abortion when she first sought one as a teenager in 2014.

Ms Y sought refugee status in Ireland after she was kidnapped, beaten, and repeatedly raped by the head of a paramilitary organisation in her home country. She discovered she was pregnant shortly after she arrived in Ireland in March 2014, at which time she was at only eight weeks pregnant. The story of how she was mistreated, how her rights and needs were ignored and violated by everyone in the health system who saw her, adding up to a substantial number of people over a period of almost three months, is a shameful tale.

Ms Y sued the state of Ireland and two private counselling groups over her treatment after she requested, but was refused, an abortion. She was wrongly denied an abortion and went on a hunger and liquid strike and threatened suicide. Suicide risk was a legal ground for abortion in Ireland at that time (and still is). Efforts were made to send her to the UK for an abortion, but she was sent back to Ireland without an abortion due to visa difficulties and the high cost involved. She was assessed psychiatrically as being at risk of suicide, and she agreed to go into hospital, believing she would be given an abortion but she was kept there and repeatedly put off with delaying excuses. When the pregnancy was at about 25 weeks, she was told it was too late for an abortion, which was false. When she was about 26 weeks pregnant, the baby was delivered by caesarean section against her will. She left the baby in the hospital.

The case first went before the High Court on 19 March 2016. Her anonymity has been maintained throughout at her request.

Her action against the State included a claim for trespass, assault and battery; negligence; and reckless and intentional infliction of emotional harm and suffering. It also includes a claim for breach of duty, false imprisonment and unlawful deprivation of liberty. She also claimed there was unjustified, intentional negligent infringement of and wrongful interference with or failure to vindicate her constitutional rights and her rights under the European Convention of Human Rights.

The HSE was unwilling at the time to intervene or acknowledge responsibility. The outcome of this case is another indication of just how much has changed in Ireland in a short space of time. The decision means Ms Y has finally received some kind of justice, though it is long, long overdue.