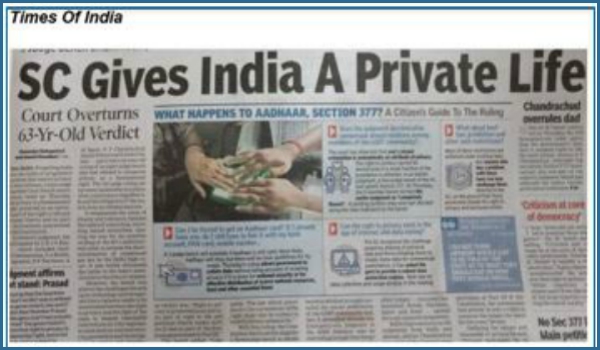 On 13 July, Justices Kurian Joseph and Sanjay Kisan Kaul of the Supreme Court of India denied a 20-year-old woman permission to terminate an over-25-week pregnancy, and suggested that such an abortion would amount to murder. They also told the woman’s advocate, Sneha Mukherjee, who is with the Human Rights Law Network, that the ‘unborn child’ should have been represented in court instead of the woman and that she should have been made to hear the fetal heartbeat.

“Sarita” (not her real name) was appealing a Bombay High Court order, dated 19 June, that denied her permission to terminate her pregnancy of 21 weeks + three days. She reported domestic violence, marital discord and a desire to initiate divorce proceedings and pursue her career as the grounds for her plea. The high court said the Medical Termination of Pregnancy (MTP) Act did not recognise these reasons as valid. Supreme Court Justice Joseph told her she would “regret killing the baby” if she “reconciles with the husband”.

Sarita’s plea in the Supreme Court asserted her right to privacy, as accorded to her by the August 2017 judgment of a nine-judge Constitution bench of the apex court. She had argued that being “forced to continue with an unwanted pregnancy” would cost her the right to safeguard the privacy of procreation, motherhood and childbearing, as the MTP Act “seemed to be making these choices for her”.

Her plea also challenged the constitutional validity of Section 3(2)(b) of the MTP Act, which stipulates the 20-week ceiling, and the scope of Section 5 of the Act, which sets the criteria for abortion beyond that. “When laws like India’s MTP Act do not provide exceptions to protect the health and welfare of the mother, these laws violate the petitioner’s fundamental right to life, health and dignity under the domestic and international norms,” she stated in her plea. She added that the MTP Act encouraged “desperate women to seek unsafe abortions from untrained medical personnel” in the absence of legal avenues.

According to the petition, Sarita was married at the age of 14 but began living with her husband and in-laws after she turned 18 in 2016. At the time of marriage, she says, she was assured by her husband that she would be allowed to study further. However, she says that two months after she moved in with her husband, she was prohibited from taking her Class 12 board exam, and demands for dowry and mental and physical torture ensued. Her petition states that she then filed a police complaint and moved back with her parents. Over a year later, she returned to her husband on the assurance that she could continue with her education and career. Instead, she claims, her husband allegedly tortured her, forcing her to leave once again. By this time, she was pregnant.

According to the petition, she was advised by her doctors to use protection during sex, but while oral contraceptives were ruled out as she was an epilepsy patient, her husband allegedly refused to use male contraceptives. But where can she lodge an appeal now?

In 2017, the Supreme Court decided the fate of more than a dozen cases of women asking for medical termination of pregnancy after 20 weeks, including of two minors. Except in two cases, until a year ago, the Court permitted the abortion. This, it seems, was the third refusal. Must the various judgments not be consistent with each other when the cases are so similar, or does the precedent of case law mean nothing in India? The “advice” of the justices in this case sounds more like that of the Catholic church than a legal expert. We await the response of the women’s rights and human rights movements. We also ask: will the government keep sitting on its hands or change the abortion law in support of women seeking abortions after 20 weeks so that delays in appeals to the courts no longer exacerbate the problems vulnerable women like these face?