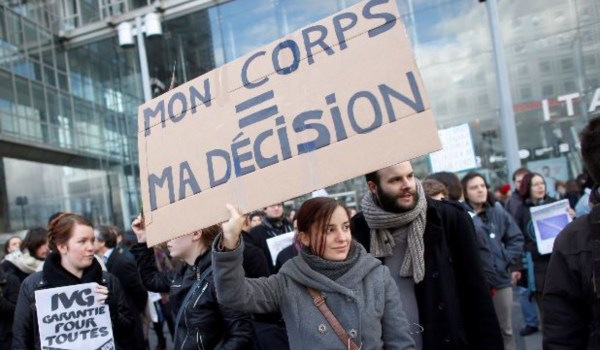 “‘But I do not do that kind of thing!’ That’s what my gynaecologist told me the day I went to her needing an abortion”, Lisa recalls. “I was 19 years old, I was terrified.”

Stories like this of rejection or guilt-making have been coming to light ever since a heated debate on the conscience clause has been stirred up in the world of healthcare. The conscience clause – a provision of the law allowing gynaecologists, general practitioners and midwives not to provide abortion even though abortion is a right recognised since the Veil Law of 1975, which every public hospital is obliged to provide. The only obligation in case of refusal: the health professional must refer the women elsewhere.

The controversy sprang up during the summer at the Bailleul Hospital in Sarthe, where there have been no abortions since January this year. “Of five practitioners, one retired, three others invoked the conscience clause and the fifth was part-time,” recalls Nadine Grelet-Certenais, a Socialist Party Senator from Sarthe. She alerted the Minister of Health Agnès Buzyn. But it was Marlène Schiappa, Secretary of State for Equality between Women and Men, who made the trip, to ensure the resumption of services, effective in early October.

Should we be alarmed? Is the Bailleul Hospital an isolated case? In Fougères in Brittany, the situation is also critical, as two practitioners played the conscience card. Such a case would never have made the national media if Dr Bertrand de Rochambeau, a gynaecologist, had not raised it on the programme “Quotidien” on TMC France TV on 11 September. He compared abortion to homicide. He said: “We are not here to withdraw life […], the law protects me and my conscience”. This is none other than the president of the National Union of Obstetrician-Gynaecologists in France. This radical statement shocked everyone and forced the health professional world to react. The anti-abortion statement was denounced by both the College of Physicians and the Order of Midwives, acting in concert. For their parts, Marlene Schiappa and Agnès Buzyn firmly condemned his words. On BFM TV, Agnès Buzyn added: “I want to make sure that there is not an increase in the number of these doctors who play the conscience card. That is why I am going to ask for an inventory.” But how soon? Our questions to her office remained unanswered.

…Soon, a petition calling for the withdrawal of the conscience clause launched on change.org (more than 84,000 signatures by mid-October). On 28 September, Laurence Rossignol, former Minister of Women’s Rights and Socialist Party Senator, tabled a bill to this effect. It says: “When the Veil Law was passed, it was the result of a compromise, it was necessary to make concessions such as the seven-day reflection period, the parental authorisation for minors… among others. Since then, these barriers have been revoked or revised. The only remaining restrictive clause specific to abortion, which stigmatises it, is this conscience clause, a clause of distrust. Because it will create controversy, no one, neither the medical profession nor the government plan to question this provision of the Public Health Code.”

For Marie-Hélène Lahaye, author of the blog “Marie gives birth” and specialist in obstetric violence, this situation is nonsense: “Anti-abortion activists are forbidden to demonstrate in front of hospitals, yet we accept that a woman needing an abortion can find herself facing a doctor who denies her this right. Abortion is an ordinary medical procedure! In France, one in three women has an abortion at least once in their lifetime even though 72% of them are on contraception. Every year, around 200,000 abortions take place, a figure that has remained stable for 20 years (INED).

Some doctors use the conscience clause so as not to provide abortions, sometimes going as far as to mistreat patients and limit their access to this fundamental right.

How many doctors are using this clause? How to identify them? What violence does this imply for patients? The biggest source of insecurity for women stems from a situation that is strangely archaic in the era of big data: there are no statistics in France on these recalcitrant practitioners. For her thesis in 2009 at the University René-Descartes in Paris, Dr Raymonde Jegoudez Moullier did research in Île-de-France in which she pretended to be a pregnant patient of ten weeks. Forty out of 56 clinicians listed an official brochure refused to provide the abortion care for various reasons, of which 11 clearly invoked the conscience clause (nearly 20%). This figure makes you dizzy, as a patient has no way of knowing in advance whether the gynaecologist or general practitioner she consults is one of these anti-abortion health professionals. And when there is a refusal, the reason is not always clear. “This lack of clarity causes a continuum of abuse,” Marie-Hélène Lahaye argues. Doctors use insidious responses, e.g. offering a date a long time away for an appointment to discourage the patient who is in an emergency situation. More serious are the guilt-laden remarks, and even the physical and psychological violence (see testimonials below).

For some health professionals with strong convictions, the simple fact of participating in the chain of care leading to abortion is problematic, as was explained to us by telephone by one of the representatives of Objection!, an association for freedom of conscience close to anti-abortion. Thus, according to him, radiologists avoid antenatal screening to detect trisomy 21 for fear that screening may lead to abortion. The most extreme refuse to put IUDs in, as they consider them an early abortifacient device that would remove the egg from the uterine wall. Not to mention the constraints to convince the patient to keep the unwanted child. This is an illegal practice in France, an offence of obstruction.

Since the French Public Health Code has a general conscience clause, removing the specific clause about abortion would not solve the problem entirely. Should we consider other measures? If the creation of a national file of objectors seems difficult to implement (the College of Physicians being opposed), “We could imagine a participatory site that would identify these doctors through the reports of individual women, much like the site Gyn & Co, which lists caring gynaecologists,” suggests Marie-Hélène Lahaye. But the most urgent is for us to review why so many in the health system do not value abortion, starting from the training of doctors. This opinion is shared by Martin Winckler, a general practitioner who has long provided abortions at the hospital in Le Mans and is the author of books against medical violence. “In hospitals, surgical abortions are mostly done by general practitioners. Hospital gynaecologists do them, but on a voluntary basis. It is a very simple task, but poorly paid and not very rewarding, and that has a sometimes heavy social aspect, which doctors are not trained to recognise.”

Abortion and contraception are hardly mentioned in their training; interns do not have a mandatory internship, for example. To change this would require making it explicit that every gynaecologist is called to provide abortions. So many arguments that struggle to find an echo in a medical world led by men. On 27 September, the board of directors of National Union of Obstetrician-Gynaecologists, composed of 29 men and 7 women, renewed its trust in its president, Bertrand de Rochambeau, support which allowed him to say on 1 October on TV that doctors who are forced to carry out an abortion because we would not accept their conscientious objection are at great risk of mistreating patients.” Where does the warning end, and where does the threat begin?

“I was 19 years old then and I went to the consultation with my mother. Immediately, the doctor, a woman in her fifties, tells me about the ‘consequences of pregnancy’. I must interrupt her: ‘There will be no consequences.’ Suddenly, everything changes: ‘I do not do that kind of thing!’ she assures us, very aggressive. I am stunned, I am terribly afraid of not being able to have an abortion. My mother starts screaming and forces the doctor to provide us with the necessary certificate for the abortion. She gave in but did not tell us anything else. My luck was in not being alone at this appointment.”

“I was 21, my decision was fast, but I felt guilty. I take a blood test and make an appointment for an ultrasound. There, I underwent a procedure with a nameless violence! I had never had a pelvic ultrasound. The radiologist was very brutal; he did it on purpose so as to punish me. I was in tears and he did not look at me, did not say a word. Without asking permission, he then made me listen to the heartbeat of the embryo, it traumatised me! I felt infantilised, as if I had done something stupid.”

“Two years ago, I was 28, I became pregnant. Family planning directed me towards practitioners; I called the first name on the list. In his office, I’m subjected to a real sermon: ‘Are you really sure you want to abort, it’s irreversible! You’ll regret it….’ I reassure him that it’s my choice; the atmosphere is very tense. The gynaecologist sets me up for an ultrasound. Without a word, she takes out the pelvic probe, puts a little lubricant and shoves it in. She hurts me, I tell her that, she answers me that it’s normal, then she’s silent. She ends up giving me the paper by asking me again if I’m really sure of myself. When, 15 days later, I call her back for the test, she literally shouts at me: ‘I have no time to spare for you!’ Which I complain to the health authority, they simply advise me to write to the regional health agency.”

“I had an appointment with a gynaecologist at the hospital to fill the prescription of from my doctor, seen a week ago, for a medical abortion. I thought I was there to collect the abortion pills, she decided otherwise… She did an ultrasound and finds an ectopic pregnancy. I’m crying. She does not explain anything to me – go down to the emergency room, she says and slams the door in my face. After 48 hours, I finally see an intern. He does another ultrasound, but finds no abnormality. I am losing patience and I ask for the abortion pill. ‘I need the consent of my boss, make another appointment.’ The secretary has only one slot in two months, strangely, just after the legal deadline for my abortion. Luckily, my usual gynaecologist came home from vacation and saw me the next day. “