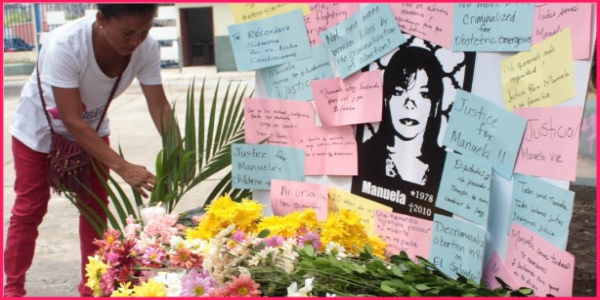 El Salvador’s absolute ban on abortion is facing its greatest challenge in years. Buoyed by shifting public attitudes, reproductive rights activists are making headway on a bill to reform the law for victims of rape and human trafficking, women carrying non-viable pregnancies, and to protect women’s life and health.

Support for keeping the ban is also formidable – and The Guardian reported in July 2017 that they may have an outside source of anti-abortion help: a US-based anti-abortion group called Human Life International that may have been funnelling funds to El Salvador’s anti-abortion movement since 2000.

This month, during an action in front of the Legislative Assembly, national and international voices showed their support for the bill to reform Article 133 of the Criminal Code, which has been languishing in the country’s Congress for the past 10 months. The bill is still “under discussion” in the Constitutional Commission of the Assembly.

In a press conference attended by legislators from the parties GANA, FMLN and ARENA, it was reported that a petition with 89,453 signatures from all over the world had been handed in, in support of the bill, which has wide acceptance in Salvadoran public opinion. Margarita Rodriguez, President of the Parliamentary Group of Women, said: “To receive (almost) 90,000 signatures from women around the world, I am committed to working to reform the national legislation and to ensure the health and lives of women”.

In the most recent survey of public opinión by Untold Research in June 2017, it was found that 79% of Salvadorans said that: “Doctors should be allowed to provide the care necessary to save the life of a mother, including the termination of pregnancy.”

The recent case of Evelyn Hernandez, who was wrongly convicted of aggravated homicide following a miscarriage, put El Salvador in the eye of the storm on the international scene, highlighting the lack of legal tools to protect the health of pregnant women.

It is hoped that the reform bill will be discussed within the coming weeks, before the beginning of the campaign ahead to launch the upcoming general election in 2018.

Meanwhile, on 17 August, a deputy from the ARENA party, John Wright, introduced a new reform bill as a citizens’ initiative, which is backed with more than 1,000 signatures, which also proposes the decriminalization of abortion in cases of rape of a child and when there is a risk to the health or life of the pregnant woman. This was despite the fact that his party has made it clear they are not in favour of abortion under any circumstances.