Dear Friends: First, we want to express our biggest gratitude for your contribution to the “Causa Justa” Movement.  You really made a difference:  The Constitutional Court received more than 100 amicus [1] briefs in favour of the elimination of the crime of abortion from people and organizations of great prestige and trajectory, including some of you, which are certainly a key contribution to a favourable ruling. Now it is time to wait for the Court’s decision that we hope will take place around May 2021, to keep the public debate open, and to organize ourselves, and to participate in a public hearing that several of us and other organizations have asked for from the Court.

2020 was an intense year for our process, as the Causa Justa Movement officially began at the beginning of the year with the purpose of opening a debate on total decriminalization. But several factors pushed our decision to file the lawsuit, with everything it entails in terms of organization and strategy. The lawsuit was filed in September, it was admitted in October and basically all year we have been in the media [2], we organized a virtual festival with a big impact, and we have not stopped our virtual mobilizations and, when possible, also via video. A lot of debate, a lot of enthusiasm, and, of course, some attempts from the anti-choice movements to push for the recognition of the existence of the human person from conception and petitions to the Court for a ruling against our lawsuit. 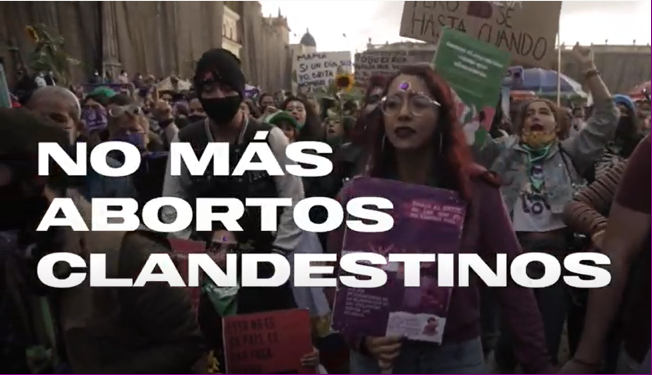 This debate will continue, and beyond the Court’s decision, which we hope will be favourable. Causa Justa became a movement that will not stop fighting until the crime of abortion is eliminated from the Penal Code, today in Colombia and hopefully, tomorrow, throughout Latin America.

We hope to count on you in 2021 and wish you a peaceful end of the year, during this strange time that we have lived through and that we found a way to challenge with a just aspiration, for the complete citizenship of women.

1. This article (in Spanish) presents the important participation that the process had through the amicus briefs sent to the Court
2. Some other newspaper articles are: https://www.elespectador.com/noticias/judicial/corte-constitucional-decidira-sobre-demanda-que-pretende-despenalizar-el-aborto/ ; https://lasillavacia.com/penalizacion-del-aborto-forma-control-las-vidas-las-mujeres-78551