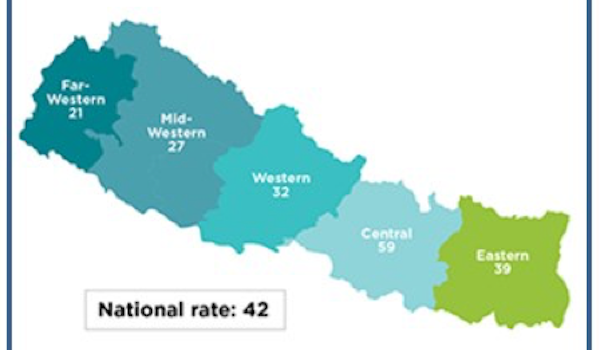 Abstract (+ excerpts from the main text)

Context: Although abortion has been legal under broad criteria in Nepal since 2002, a significant proportion of women continue to obtain illegal, unsafe abortions, and no national estimates exist of the incidence of safe and unsafe abortions.

Methods: Data were collected in 2014 from a nationally representative sample of 386 facilities that provide legal abortions or post-abortion care and a survey of 134 health professionals knowledgeable about abortion service provision. Facility caseloads and indirect estimation techniques were used to calculate the national and regional incidence of legal and illegal abortion. National and regional levels of abortion complications and unintended pregnancy were also estimated.

During the past decade, the Ministry of Health has developed strategies for implementing the law and expanding access to safe and legal services. These strategies include training clinicians to perform abortions, providing them with necessary equipment, and certifying providers and health facilities (both of which need government approval to provide abortion services). All health facilities that have official approval to provide abortions are expected to perform first-trimester abortions. A few lower-level facilities, such as health posts, are approved only to provide medical abortion up to nine weeks’ gestation. To provide abortions after the first trimester, facilities need separate approval and are required to have staff members trained and certified to provide such abortions…

Of the 386 surveyed facilities, 63% offered legal abortion, post-abortion care or both. Provision of one or both services was nearly universal (88-100%) among large facilities, such as tertiary, district and private hospitals. In contrast, the proportion that provided either service was lower among small facilities, such as health posts (46%), sub-health posts (27%) and private clinics (56%). Nationally, a weighted total of 1,112 facilities provided one or both services.

Nepali women still face barriers, including lack of knowledge about the law, not knowing where they can access services, stigma, distance to reach providers and cost. However, abortion legalization has led to a decrease in the number of women presenting with severe abortion complications, and contributed to a decline in the country’s maternal mortality ratio, which fell from 580 maternal deaths per 100,000 live births in 1995 to 190 deaths per 100,000 live births in 2013.

Conclusions: Despite legalization of abortion and expansion of services in Nepal, unsafe abortion is still common and exacts a heavy toll on women. Programs and policies to reduce rates of unintended pregnancy and unsafe abortion, increase access to high-quality contraceptive care and expand safe abortion services are warranted.