Home » News » 4th annual demonstration for abortion law reform 25 July, pro-choice poster art around the University of Chile in Santiago, and the case of an 11-year-old pregnant from repeated sexual abuse – all in the news

On 25 July, there were demonstrations in Santiago and Valparaiso in Chile, for the 4th year in a row, calling for free abortion with no restrictions because women have abortions.On 4 August, Ms Magazine’s blog reported on dozens of new, colorful posters alongside older, worn student protest banners, which the blog writer found while walking through the neighbourhood of the university in Santiago. The writer said: “Protest art is far from uncommon in the neighborhood surrounding the University of Chile – students have spent most of the past two months on strike protesting for educational reform, and have decorated their neighborhoods appropriately. Yet, in the predominantly Catholic country, one thing certainly is uncommon: pro-choice art.”The posters were created by the Brigada de Propaganda Feminista (Feminist Propaganda Brigade), with the hashtags #MisoPaTodas and #InfinitasCausales. Arguing that all women should have access to misoprostol, and that there are infinite reasons why a woman might choose an abortion, these posters are part of a larger feminist movement growing across the country. 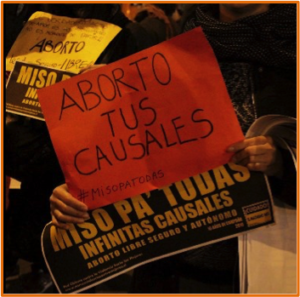 Abortion on all grounds, an infinity of grounds.On 11 August, the case of an 11-year-old girl from the Araucania region who became pregnant after repeated sexual abuse by her 41-year-old stepfather came to light and is causing controversy, not least because the authorities were not allowing the pregnancy to be terminated.The girl was already five months pregnant when her condition was reported to the police by the head of her school, her mother and the child herself. The school authorities were the ones who discovered the pregnancy, after noticing the physical changes in the girl in recent weeks. Apparently, the stepfather was abusing her repeatedly and had threatened her so that she would not tell anyone. After the complaint was made, he was arrested.This report has led to renewed calls on President Michelle Bachelet to move the abortion law reform bill forward. It has been sitting in the Health Committee and awaiting a vote in the Senate since March. The bill would decriminalise abortion on three grounds: danger to the life of the mother, fetal malformation and rape. However, although it would be an advance, the bill would only resolve about 5% of the 70,000 clandestine abortions that are estimated to take place annually in Chile.The reason why the abortion is not being allowed is, according to the report in La Nación, that the new law limits the termination of pregnancy in the event of rape to 14 weeks. However, given the girl’s young age, taking the pregnancy to term would also represent a risk to her life, which should have no time limits.On Twitter, #MisoPaTodas condemned the refusal to allow the abortion.SOURCES: #MisoPaTodas also has photos from the demonstration and the posters.Ms Magazine Blog, by Cecilia Nowell, 4 August 2016 [We have been unable to access any link via Ms Magazine to the story about the posters.]La Nación, 11 de agosto de 2016 + PHOTO: Reuters re the 11-year-old girl