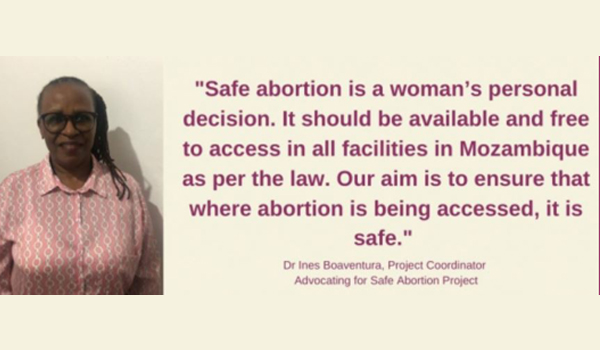 Mozambique liberalised its abortion law in 2014, granting legal abortion on request in the first 12 weeks of pregnancy, and longer upper limits in cases of rape, incest and fetal anomaly. The Associação Moçambicana de Obstetras e Ginecologistas (AMOG), a member of FIGO, was proud to support this change in the law. Clinical norms to guide treatment were also made available, and benefitted from AMOG’s technical expertise while being developed.

However, barriers that prevent women accessing abortion care remain; the law is often not being implemented. Avoidable deaths are still happening. An estimated 11-18% of hospital maternal deaths are due to unsafe abortion, the same figure as in 2008.

AMOG is partnering with FIGO on the Advocating for Safe Abortion Project. They will be working with their members in every province of Mozambique, to train them and other healthcare providers on the law and clinical norms. They are also supporting the generation of better evidence and data, through partnering with universities and the Ministry of Health, to facilitate better understanding of the issue and the barriers to law implementation. Lastly, they are supporting journalists to write accurate and engaging stories about safe abortion, and disseminating messages to communities, to help sensitise and change social norms.