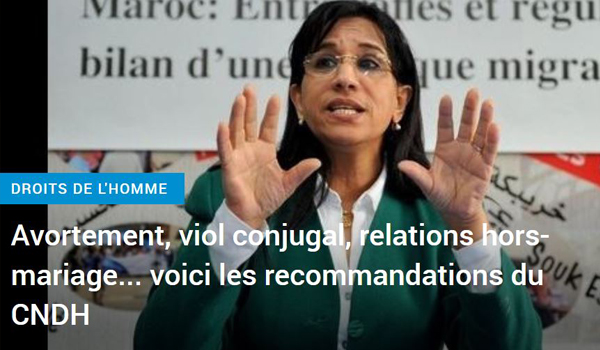 In a memorandum to the Government and Parliament of Morocco, the National Council of Human Rights (CNDH) is clearly in favour of changing certain provisions of the Moroccan Penal Code, in general making abortion legal on wider grounds but also changing Articles 449 to 452, which call for imprisonment for illegal abortion. The memorandum insists that the law take into account the “psychological and social security” of the woman, as well as the safety of her health. For the CNDH, these reasons justify the right to abortion in the first three months of pregnancy. They add: “A woman suffering from mental disorders has the right to have an abortion without the authorisation of the husband though, of course, under the control of the family judge”.

These recommendations arose after Hajar Raissouni was pardoned by the King.

As regards marital rape, responding to the demands of a large part of the feminist movement, the CNDH also calls for a new article in the next version of the Penal Code, incriminating marital rape because marriage does not force a wife of to have sexual relations with her husband.

The head of the government, El Othmani, responded three days later by saying he is opposed to any relaunch of the debate on the issue of abortion at a meeting of the Justice and Development Party (PJD). Nor does he wish to deny what has already been agreed. “There was a national debate in 2015 on the issue of abortion. HM King Mohammed VI validated the recommendations of a special commission that led the dialogue. His recommendations were, moreover, included in the draft reform of the Penal Code.” He added, however: “Our position is clear on issues that do not respect the national constants. We will remain categorical about everything related to the Islamic referential. Hard to go back after finding a compromise.”

Whatever his meaning in these last lines, the special commission’s recommendations have not been implemented in law or practice. SOURCES: 2M.ma, by Mohammed Hamza Hachlaf, 1 November 2019 ; 2M.ma, 4 November 2019 (les deux en français)