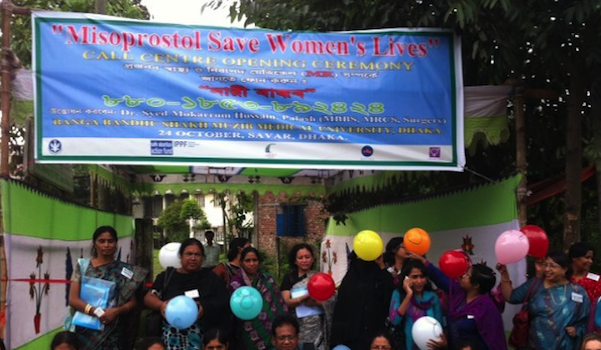 In Pakistan, an estimated 890,000 induced abortions take place every year. The current restrictive law, which came into effect in 1997, permits abortion only to save the woman’s life or to provide “necessary treatment”. While “necessary treatment” is not defined and is allowed only for abortions before organs and limbs have formed in the fetus, it could be argued that it encompasses risk to health. However, service providers know little about the law, and because women also have limited knowledge and limited access to safe abortion services, unsafe abortions are still a major cause of maternal deaths.

With support from the Asia Safe Abortion Partnership (ASAP), three groups in Pakistan launched the Misoprostol Hotline in 2010:

The hotline was funded by Mama Cash and technical assistances provided by Women on Waves and Women on Web. This was the only hotline of its kind in Asia when it was launched (now there are hotlines in six other Asian countries) and it was the first ever in an Islamic country.

The Misoprostol Hotline has the following objectives:

Training for representatives of the three NGOs and for Hotline staff was conducted by a Women on Web team. Women’s rights activists, youth leaders, women’s health counsellors and doctors participated in this training. The Hotline was launched at a press conference and began receiving calls from Pakistani women and women outside the country too, and from young girl’s asking about self-management of abortion and post-partum haemorrhage.

The Hotline campaign was acknowledged and awarded membership of the Pakistan Alliance for Post-Abortion Care in Pakistan.