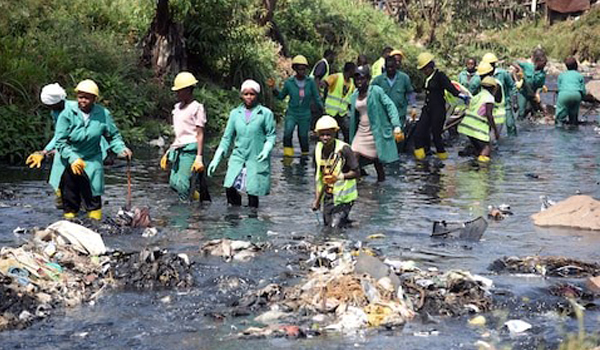 “Dumped babies are just the tip of the iceberg”: the consequences of curbing reproductive rights

Two months earlier, the 37-year-old volunteer spotted a blue plastic bag amongst the garbage. She immediately felt anxious: “You have to open it even though you fear what you’ll find.”

Inside was what she believed to be a recently aborted fetus, several syringes and blood-stained cotton wool. “I’m a mum, I have two kids,” she explains. “It hurts.”

In one 350-metre section, nine fetuses and newborns have been found this year by this clean-up team. After police said the parents could not be identified, the team buried the babies – including two sets of twins – in a makeshift grave.

This week several thousand people are in Nairobi for the International Conference on Population and Development (ICPD). The original event, 25 years ago, kick-started the global movement to recognise reproductive rights as human rights. And speakers touted huge gains in global access to contraception, health services and a reduction in maternal deaths.

Yet the Nairobi riverbanks tell a story of unfinished business. On Tuesday, the first morning of the summit, the Komb Green Solutions team found their ninth body: a baby boy floating down Nairobi river. This year, Nairobi Governor Mike Sonko asked police chiefs and county officials to investigate the “worrying trend” of bodies found in the river. He has accused hospitals of illegally dumping fetuses and babies. Yet it is not just the city’s rivers: babies are also found tucked into dustbins, dropped down pit latrines and discarded by roadsides.

“If you live in Kenya, you’ll have heard many stories about abandoned babies,” explains Nelly Bosire, a Nairobi-based obstetrician-gynaecologist. “But the problem is bigger than it should be – and bigger than we are talking about.” Young women from the poorest communities are most impacted, she says. Cases frequently occur around informal settlements, where contraception is difficult to access. In Africa’s biggest slum, Kibra (formerly referred to as Kibera), 50% of 15-25 year-old women are pregnant at any one time.

Dorothy, a 27-year-old pastor, spends much of her free time walking around the streets of Nairobi’s sprawling shanty-towns. By August of this year, she had stumbled on 12 abandoned infants. Some were just several hours old, clenched fists revealing them struggling between life and death. Of those she rescued, eight died; four lived.

This much longer article was a collaboration between The Telegraph, The Fuller Project for International Reporting, and Kenya’s The Daily Nation.