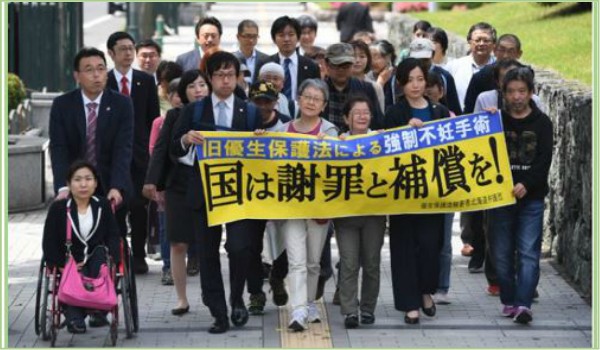 A Hokkaido couple and a Kumamoto Prefecture man have filed suits against the Japanese government on 28 June 2018 over forced sterilisations and abortion under the now defunct eugenics protection law (1948-1996) in violation of their reproductive rights and their constitutional right to the pursuit of happiness. These cases, filed in two district courts, call for a total of 55 million yen in compensation from the central government. The plaintiffs argue that the government and the Diet (parliament) failed to take measures to aid victims after the eugenics law was revised in 1996 to become the current Maternal Health Act.

They follow another suit filed in another district court on 17 May. One of them is the first in which a plaintiff was subject to both a forced abortion and forced sterilisation. Together the three cases bring the number of people nationwide who have filed for compensation against the central government to seven.

The Hokkaido couple, aged 75 and 81, are asking for 22 million yen in government compensation. The wife has an intellectual disability that is thought to have been caused by a high fever while she was an infant. When she was in her 30s, she married her husband, and became pregnant four years later. She claims that doctors performed both an abortion and sterilization on her without her consent. Her husband has no disabilities or illnesses, and says that he was forced to sign off on the procedures done on his wife by relatives and others. According to their legal representatives, the couple made a request to the Hokkaido Prefectural Government and the hospital to release records of the procedures, but there has been no confirmation that the documents have been retained. They claim that their “right to plan a family” was taken away under the former law.

The 73-year-old man in the Kumamoto case filed for 33 million yen in compensation. When he was around 10 years old, he claims that unbeknownst to him, his testicles were removed at a hospital where he was taken by his mother. He did not have an intellectual disability or a mental illness, the criteria for forced sterilisation under the eugenics protection law, but he had been diagnosed with osteoarthritis. The defunct law prohibited the removal of the testes, but according to his legal representatives, “His mother testified that her son ‘underwent a eugenic surgery’, and we determined we could hold the government accountable.” The hospital where he underwent his surgery no longer exists, and there are no records and other documentation.

According to government statistics, there were more than 29 million cases of forced abortion carried out under the eugenic protection law from 1955 to 1996, with 26,375 of those abortions listed as due to a hereditary disease. Cases where women with disabilities or other illness targeted by the law had forcible abortions and who were sterilised at the same time have been confirmed in municipalities across Japan. Little progress has been made in grasping the number of unwanted abortions, but the filed suits may lead to more such cases.