Today, 3 October, Polish women are going on a strike as a sign of protest. Inspired by women of Iceland who went on strike over a range of gender equality issues in 1975, this strike is strictly in reaction to the Polish government’s attempts to further tighten the already very restrictive law on abortion. It is a completely grassroots initiative, people are discussing possible activities and potential moves via internet, planning protests and street actions across Poland and also in other cities.

According to the Krakow Post, official protests are planned in over 60 Polish cities and 10 European capitals so far. The demonstrations should 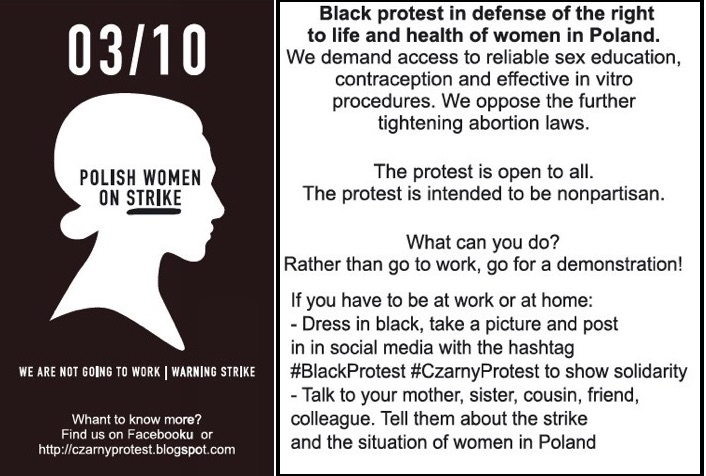 reach their peak at 6pm. Many companies large and small openly support the protest and might not open on Monday. For example, a group reports that in Romania, Polish and Romanian activists are organising a protest march in Bucharest on 3 October in support of Polish women’s plight. In addition, they are sharing a compelling documentary about the history of the impact of the pro-natalist, anti-abortion regime in Romania in the past under Ceaucescu, so that people will not forget, so that people will imagine what could happen again.

The strike has received support from high profile Polish figures, including super model Anja Rubik. Her tweet one week ago received 12,600 likes. We will share more on social media as we hear it.