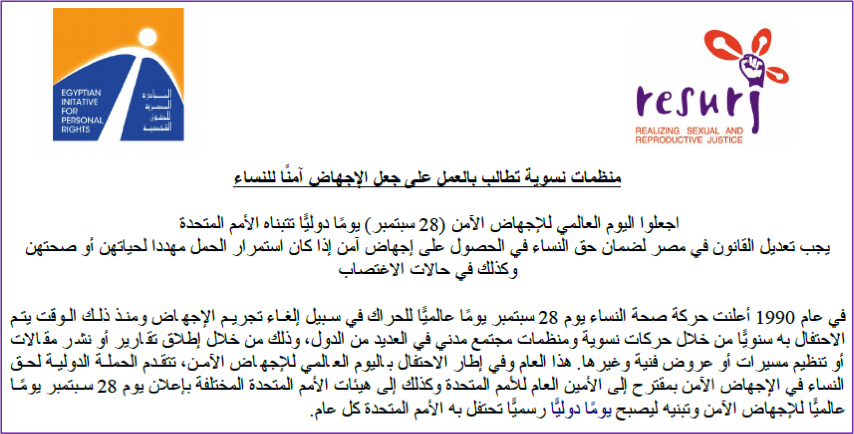 As part of the campaign, the Egyptian Initiative for Personal Rights and the global alliance Realizing Sexual and Reproductive Justice (RESURJ) are again calling on the Egyptian legislator to amend legal provisions on abortion to guarantee women’s access to safe abortion in cases where pregnancy constitutes a threat to the woman’s life or health or if the pregnancy is the result of rape.

We note that when it comes to abortion, Egypt is one of the most restrictive countries in the world. Egyptian law does not permit abortion on any grounds, and it does not allow survivors of rape or incest to exercise their right to terminate unwanted pregnancies resulting from rape. The law also punishes women who intentionally abort a pregnancy with imprisonment. We believe it is time to reconsider the provisions in the Penal Code on abortion. Women in Egypt are living under an outdated law, adopted in the 1930s in an attempt to mimic French law at the time. While similar laws restricting abortion have been amended in most countries, the law in Egypt remains unchanged.

We also note that the sole exception in the law is in the physicians’ Code of Ethics, which permits doctors to conduct an abortion in the case of threats to the mother’s life or her health. This exception, however, represents only a moral, not a legal duty. These legal provisions constitute a serious restriction of women’s right to access safe abortion in many cases and a grave violation of their right to life, health, sexual integrity, and privacy, as well as their right to make decisions about their bodies.

We therefore call upon the Egyptian government to: