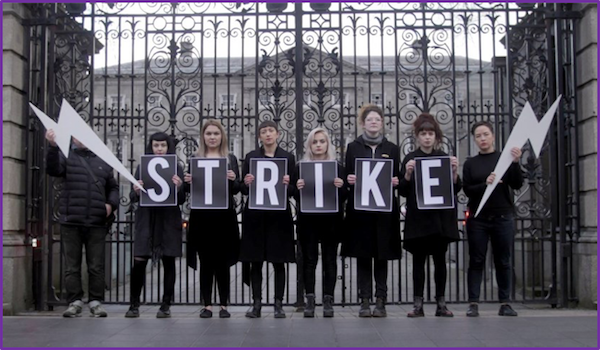 An ad-hoc, non-affiliated group of activists, academics, artists and trade unionists are preparing a nationwide strike for repeal of the 8th Amendment to the Irish Constitution on 8 March 2017. Their statement, signed by 22 groups, says:

“Our demand is that the Irish government call a referendum to repeal the 8th Amendment by the 8th of March. If not, Ireland will strike.

“The strike will not be an industrial strike in the traditional sense but could include taking an annual leave day off work, refraining from domestic work for the day, wearing black in solidarity or staging a walkout during your lunch break. We also encourage any business owners in a position to close their services at no cost to workers, to do so for all or part of the day as a solidarity action.”

Aoife Frances says “We call upon the Government to take direct responsibility for what is a violation of human rights. We believe a national strike is not only possible, but an incredible opportunity to show the sheer power of our movement, and to put pressure on the government to call a referendum. In the past 5 years, support for repeal has grown to a level that the government can no longer ignore.”

The action by Strike4Repeal follows in the footsteps of the national strike in Poland last year.

On 7 December 2016, Broadly.Vice reported that Irish Customs were seizing an increasing number of medical abortion pills that had been sent in the post. They obtained figures under the Freedom of Information Act from the Republic of Ireland’s Health Products Regulatory Authority which demonstrate the extent of the country’s war on women which show that between 2011 and 2015 the authorities intercepted a total of 3,467 tablets, with the numbers seized increasing each year. (It is not clear how many women/addresses were involved from these numbers.)

Women on Web confirmed to Broadly that they had stopped shipping to the Republic of Ireland in 2009, when customs began intercepting their packages. Safe2Choose also confirmed that they are no longer able to post to women living there. “So often women will call me,” Mara Clarke of the Abortion Support Network in London told them, “[to say] the pills have never arrived.” Women are often several weeks later into their pregnancies by this time, making travel to another country and the cost of abortion even more difficult.