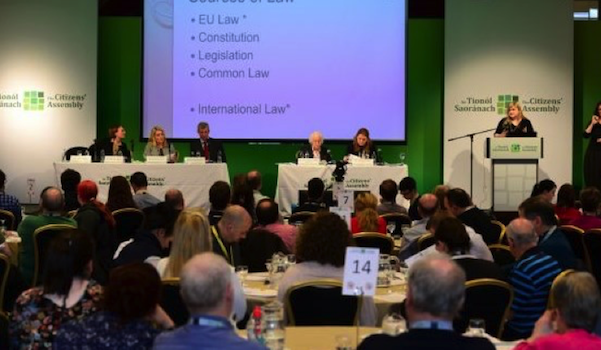 In mid-2016, a Citizens’ Assembly was initiated by the Irish Government to consider the views of the country on the future of the eighth amendment to the Constitution, which gives equal right to life to an embryo/fetus as to the woman carrying it, thereby making all abortions illegal and creating a profound conflict of rights that in practice led to the death of Savita Halappanavar.

The 99 ordinary assembly members were randomly chosen by a polling company to be broadly representative of the electorate. The Assembly is chaired by Judge Mary Laffoy, a Justice of the Supreme Court of Ireland appointed in July 2013, who the Irish Independent says is highly regarded within legal circles and presided over the commission of inquiry into child abuse.

On the day of the Assembly’s first meeting in October 2016, the Prime Minister Enda Kenny said the issues the assembly will be discussing are “beyond party politics…deeply complex, hugely challenging and profoundly ethical”.

The Irish Times reported that the Assembly was swamped with submissions from the start. They received some 4,500 submissions via post and online, and then in the final 24 hours before the deadline on 16 December, a further 3,200 online submissions arrived along with a large number of further postal submissions. Not surprisingly, an extra weekend was added to their schedule to have more time to consider their position.

On 7 January, experts made presentations on the medical, legal and ethical issues raised by fatal and other fetal abnormalities and how they relate to the human rights of women and the current Constitutional protection of the unborn. Senior Counsel Eileen Barrington was asked what the implications were for Ireland in international law if no change was made to the Constitution in the context of the Amanda Mellet v Ireland judgment in 2016 by the UN Human Rights Committee. Mellet had been forced to travel to England for an abortion even though her pregnancy was not viable. The HRC ruled that Ireland’s abortion laws violated her human rights under the International Covenant on Civil and Political Rights. In consequence, the State paid her €30,000 in compensation. This discussion raised the issue of “international pressure” to change restrictive abortion laws.

Advocating from a pro-choice perspective, Prof Bobbie Farsides, professor of clinical and biomedical ethics at Brighton and Sussex Medical School in England, said how we treat the fetus has an unavoidable impact on how we treat the woman carrying the fetus. She suggested the law cannot ultimately decide what is absolutely right on this matter because so many people find it difficult to agree. She said people who are anti-abortion could, in the circumstances where abortion is legalised, still argue for their position, but those who are pro-choice have no such freedom when abortion is illegal. The Irish Times quotes her as saying:

“One can in society decide that you are willing to accept as legally permissible something that you personally will never accept as morally acceptable. We may not like or respect the way in which some people characterise the fetus, we may not approve of all the choices people make, but we can still think it important to protect their right to make them.”

On 8 January, the Irish Times reports that the group discussed for the first time what their eventual recommendations on possible changes to the law might look like, through a reflective written exercise. They were all asked to list the reasons whether to regulate abortion through the Constitution or not. Chairwoman Ms Justice Mary Laffoy then read out what she called an “ad hoc flavour” of the responses which, she said, represented “a very wide range of views”:

In favour of regulation through the Constitution:

– a basic human right of choice over the the reproduction of the body;

– it would protect the ethos and culture of the Irish people in a more permanent way;

– the right to life was inalienable and needed to be protected in the Constitution.

Opposed to regulation through the Constitution:

– because it would control women’s behaviour;

– because culture slowly evolves and locking it into the Constitution did not make sense.

– the best scenario was to repeal the Eighth Amendment and replace it with laws;

– it was a medical issue and should be treated as such and not be in the Constitution.

SEE ALSO: Live Stream of the Second Meeting of the Citizens’ Assembly