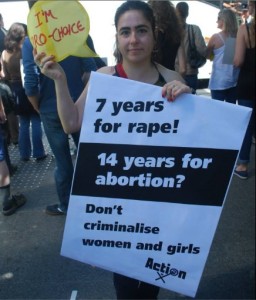 Tara Flynn was the MC for the speeches after the March. She had recently spoken out about her own experience of travelling for an abortion in the past. Speakers included Mara Clarke of the Abortion Support Network, Sinead Redmond of Aims Ireland, and Mandy LaCombre of the Trade Union Campaign to Repeal the 8th Amendment.

Abortion Rights Campaign published a series of blogposts, in which pro-choice people told us why they were going to be marching, in order to encourage those who might be thinking about coming to their first March on September 26th. First up was “I’m Marching for a Better Future” by Caoimhe Doyle. She said: “I was living in Spain at the time of the infamous Youth Defence billboard campaign. When I returned to Ireland that summer it seemed young women, in particular, had been awoken to the complete b..s.. of our regressive abortion laws. We had kind of forgotten, or maybe just accepted, that we lived in a country that didn’t see our bodies as our own. Women who had had abortions were shamed into secrecy. We had abandoned these women and somehow convinced ourselves that it wasn’t all that bad.” Read more: http://www.abortionrightscampaign.ie/2015/09/22/im-marching-for-a-better-future-by-caoimhe-doyle/

In the days leading up to 28 September, 1.472 Irish artists, actors, singers, authors signed the Artists’ petition calling for the repeal of the 8th Amendment to the Irish Constitution, which gives a fetus the same rights as citizens.

In Limerick, a demonstration was held on 28 September calling on the City and County Council to support repeal of the 8th Amendment. It featured suitcases, symbolic of all the women who have to travel outside of Ireland to obtain a safe, legal abortion in other countries. See photo. https://www.facebook.com/events/1676818002536684/