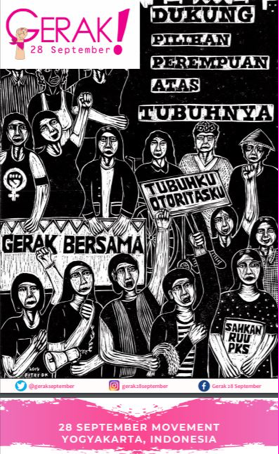 Samsara has organised for the 28 September campaign since 2011, and now we involving more networks to join us in Gerak 28 September (28 September Movement) at Yogyakarta, Indonesia. Our allies chose the theme: “Let’s move together to support women’s choices over their bodies” in the context of the situation in Indonesia about abortion, that still restricts for women. Our activities included:

– A Quiz Contest “Knowledge of Sexual and Reproductive Health Rights in the Province of D.I.Yogyakarta” (for youth aged 16-24)

– Thematic Discussion: Our Bodies and Criminalization through the new draft Penal Code

We are facing so many new discriminatory regulations that affect bodily autonomy, such as the new draft Penal Code that penalises abortion and women. This text has been rejected by alliances of civil society and students with a large demonstration over three days because there are so many problematic aspects. We have shared the whole story on social media, but it is still in Bahasa: Instagram and Twitter