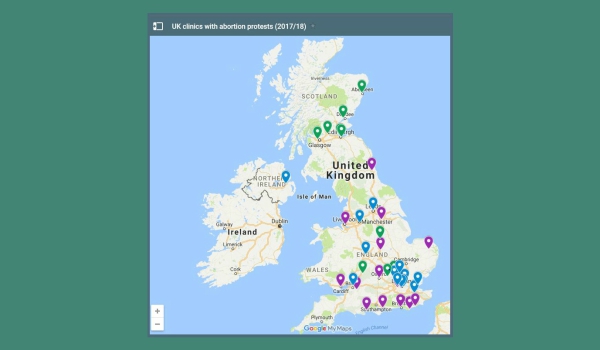 The British Pregnancy Advisory Service (Bpas) is a charity that offers abortion care, contraception, STI testing, miscarriage management, and pregnancy counselling to nearly 80,000 women each year via clinics in England, Wales, and Scotland. As part of their advocacy work, they have been running the Back Off campaign to introduce legal buffer zones around abortion clinics and pregnancy advisory bureaux since 2014, based on evidence collected from their clients that protests outside clinics are distressing and intimidating. Their work with Rupa Huq, a Member of Parliament, led to the establishment of a government review into protests outside abortion clinics, to which they wrote an in-depth response.

In the last 12 months, 18 of their 70 clinics have been affected by anti-abortion protests, including:

> A daily presence during Lent of up to 12 people holding banners, chanting, praying, singing, distributing leaflets, and asking people why they were there

> A permanent presence of people (5 days a week, 6+ hours a day) who approach clients as they try to access services

The Back Off campaign has worked with a number of local authorities to try and make use of existing anti-social behaviour powers to address the issue of abortion clinic protests in their local areas (not just outside Bpas clinics). So far, no Local Authority has introduced a Public Spaces Protection Order for these purposes. Although Bpas have been in touch with local police, in no area has there been a solution found by the police to the issues raised by clinic protests. Their clinic staff sometimes engage with protesters where they are impacting on clients entering and leaving the clinic. This can include requesting that they stop approaching clients, that they abide by previous agreements with the police, or that they do not trespass on clinic grounds. However, aside from making clear where clinic grounds extend to, these interactions have a minimal effect.

Bpas say the protests are intended to prevent abortions from taking place. Different groups use different tactics but all share the opinion that abortion is wrong and that either the provider should not be present and providing abortions, or that women should be deterred from accessing abortion services and instead choose to continue with their pregnancy.

Protests happen not only outside stand-alone abortion clinics, or independent provider clinics, but also in National Health Service (NHS) clinics, such as doctor’s surgeries and hospitals. Out of the 42 clinics across the country – both Bpas’ and Marie Stopes’ clinics – affected by protests in the last year, 35 were in England and Wales and 7 in Scotland; 17 of the 42 were NHS services.

Protesters almost always approach women as they are entering or leaving the clinic, attempting to and tell them their opinions on abortion to deter or dissuade them from accessing services. They carry placards or posters, and offer leaflets that sometimes show dismembered foetuses and/or give false information about the negative impact of abortion, e.g. that it causes breast cancer, eating disorders, depression, and suicidal thoughts. They may tell women that abortion is ‘murder’ or they are a ‘murderer’, or that they are ‘doomed’, or that their ‘baby’ won’t get into heaven. They may hold prayer vigils, either silent or aloud, and sing hymns. Some use body cameras, they say to film their own activity and interactions but in some cases women they approach are visible and identifiable without their permission. Some more established groups are reported to follow staff and clients as they enter and leave the clinic, in some extremes banging on car windows or attempting to record registration numbers. This usually happens in groups that have been in place for longer and who have not, thus far, been challenged by the local council or police. One group holds candlelight vigils, others spread “holy water” around the clinic entrance.

The evidence Bpas have collected shows a clear pattern of clients and staff feeling harassed and intimidated. However, under existing law, it is difficult to prove harassment (as per the Protection from Harassment Act 1997) because of the one-off nature of most interactions with protesters, and difficult to prosecute under the law, owing to the unwillingness of women to disclose their own confidential medical records in order to achieve a conviction. The report includes four pages of examples as reported by women.

During 2017, Bpas recorded 195 reports of protest activity outside BPAS clinics. Since 2014 they have also operated a system of client comment forms – allowing clients who encounter protests to share their experiences in writing if they choose whilst still in the clinic.

The police response to complaints by protesters versus complaints by clinic staff and clients is markedly different. Despite persistent complaints in a number of areas against protesters, police action against them is vanishingly rare. On the other hand, minor ‘retaliatory’ action such as hiding posters is investigated and pursued by the police over months. For example, a local resident who saw graphic posters outside one clinic put them in a bin and was arrested for theft. Although few protesters have been arrested or charged, Bpas argues they are doing harm women and healthcare workers alike, but that current law is ill-equipped to deal with them.

The report goes on to provide prodigious examples of efforts Bpas has made to work with the police, address harassment and intimidation, advise and support clients and staff, record the extent to which women feel upset and stressed by the protests, and list the laws which they have attempted to use to deal with the harassment.

The Home Office consultation has closed. Will the government now take action to make this harassment stop?