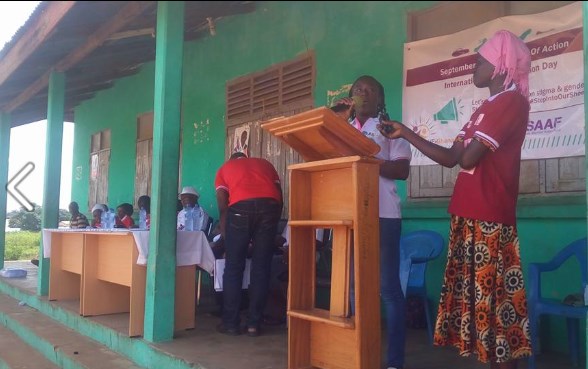 At this local meeting, the representative of the District Health Director lamented the difficulties which health facilities face in order to treat victims of unsafe abortion who arrive at late stages in their predicament (with excessive bleeding). She appealed to everyone to desist from having unsafe abortions and bemoaned some repercussions of the use of unapproved means of causing an abortion. She told the participants to feel free to come to local health facilities to have a safe abortion. The Executive Director of Asudeve, Mr Kanton Osuman, called on all and sundry to eliminate abortion stigma and gender stereotyping. The Headmaster of Tumu Secondary Technical School entreated all participants at this year’s event to be ambassadors of safe abortion and educate their peers on what they have learnt from the event. He also said students should reach out to their guidance and counselling masters for help on abortion. And even said female students are at liberty to defer studies and return after delivery. The guest of honour, Hon. DCE Saborh Juasuglo, attributed unsafe abortions in the country to causes such as economic hardship, poverty and socio-cultural barriers as dominant causes. He maintained that abortion is not a heinous crime. He also underscored a number projects being put up by government to curb unsafe abortion.