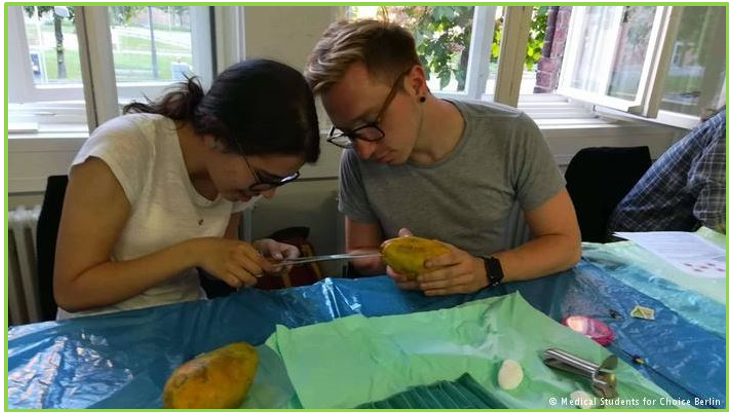 Abortion providers can be hard to find in Germany. In some cities there are none, and their number appears to be declining, while medical schools often fail to teach the procedure so crucial to women.

There were around 101,200 abortions in Germany in 2017. Yet future doctor Alicia B was disturbed to find that abortion played virtually no role in her studies at Berlin’s Charité University Medical School. “In six years of studies… we learn almost nothing about such an important intervention,” she says.

Abortion is against the law in Germany in a very unusual way. If it’s a medical necessity, if the pregnancy was caused by rape, or if the woman is less than 12 weeks pregnant and has taken part in a counselling session, she can have an abortion. That doesn’t mean the abortion is legal but neither the woman nor the provider will be punished. However, medical professionals are banned from advertising that they do abortions, which has been interpreted to mean even providing information on their websites about abortion.

There appear to be fewer practitioners providing abortions, as ageing doctors retire. The Federal Statistical Office (Destatis) says that abortions are carried out at about 1,200. Many women seeking a provider use the website of Austrian gynaecologist Christian Fiala, which lists 1,141 doctors, clinics and hospitals in Germany .

ProFamilia, the German family planning association, offers counselling sessions which pregnant women must attend to be permitted to get an abortion without providing a reason for their choice. They have heard reports from numerous federal states that there are deficits in the provision of abortion, even though German states are required to provide adequate facilities.

The German states are also responsible for medical education, so education in abortion provision differs. One student reported that in Berlin, abortion doesn’t come up until nearly the end of one’s studies, in the ninth of 12 semesters, and then only in a seminar on prenatal diagnostics. “Terminating a pregnancy is spoken of within 10 minutes, if you’re lucky,” she reported. “Fellow students have said it didn’t come up at all, because time ran out.” But future doctors are expected to be able to discuss the legal and ethical aspects of abortion.

This student and others now make up Medical Students for Choice (MSfC) at the Charité Hospital in Berlin. They want medical schools to teach prospective doctors to carry out abortions and for the taboo that surrounds choosing to end a pregnancy to be eliminated. In hands-on workshops they now organise, MSfC gynaecologists help medical students do vacuum aspiration abortions using papayas. This workshop makes it clear that it is a small, uncomplicated 10-minute intervention. It also offers a platform for students to talk with gynaecologists who do abortions themselves.