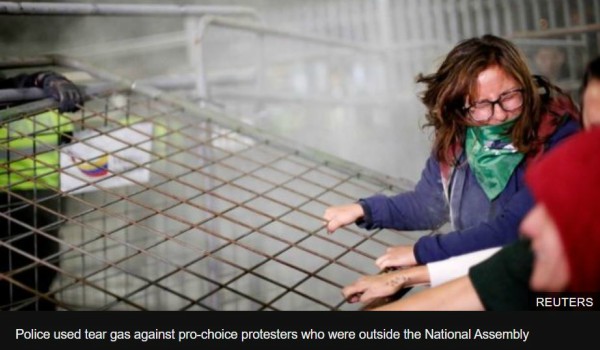 Based in a 1938 law, abortion is not punishable in Ecuador if “it has been carried out to avoid a danger to the life or health of the pregnant woman and if this danger cannot be avoided by other means.” The law reform proposed to the Assembly would also have allowed abortion “if the pregnancy is a consequence of rape or incest, insemination without consent, or if the embryo or fetus suffers from an acquired congenital or genetic pathology incompatible with independent extra-uterine life, in any case of a lethal nature, as determined by a health professional”.

In the case of a request for abortion on grounds of rape and incest, the bill said: “if the pregnancy does not exceed 14 weeks, the affirmation of the victim of what took place before the medical staff will be enough. The rape/incest would afterwards become the basis of a criminal investigation by the competent authorities. In the event that the victim is a girl or adolescent, authorization from the parents or legal guardians/ representatives will also not be required, and the State will provide necessary support so that the decision is free and informed.”

The vote was 65 in favour of the bill, 59 against and 6 abstentions. This is five votes short of the minimum of 70 required for approval of any bill by the National Assembly.

Yet Ecuador’s Health Ministry has said 15.6% of maternal deaths in 2014 were a result of clandestine abortions. Moreover, 11 women report cases of rape every day nationwide. On average, some 2,500 girls a year, or seven each day, give birth, while seven others terminate their pregnancies.

A quarter of all pregnancies in those aged 15–19 is a result of rape, according to the Fundación Desafío. “Girls and women in the country, victims of sexual violence, are systematically tortured, forced into motherhood that they don’t want,” said Ana Cristina Vera, executive director of Surkuna.

During the vote, dozens of pro-choice and anti-abortion protesters gathered outside the parliament’s building in Quito. After the result was announced, supporters of the bill clashed with police, who used pepper spray to disperse them, according to El Comercio, and teargas, according to the BBC.