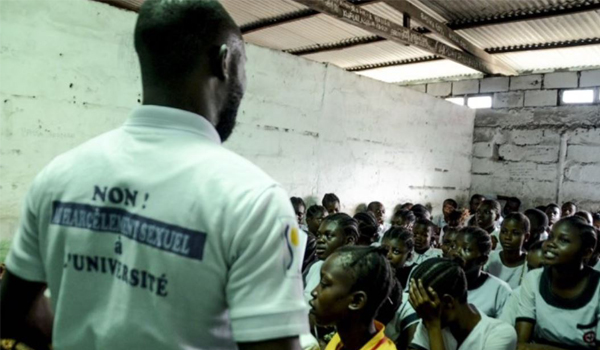 Gynaecologist Denis Mukwege has highlighted the suffering of women victims of rape in the eastern Democratic Republic of Congo (DRC). But the cruelty of the rapes committed in the context of war must not allow us to forget the daily need for access to reproductive rights.

In Kinshasa, Si Jeunesse Savait (If Youth Knew,SJS) plays an important role in providing young women with reproductive health information and support, in a country where the most basic rights are often not respected. SJS, a partner of the Belgian NGO Le Monde for Women, also offers support to young victims of violence because of their sexual orientation.

In an unstable political and socio-economic context, the number of clandestine abortions continues to increase in the DRC. Although post-abortion care is supposed to be a public health priority, in the field the reality is quite different.

Because young women do not have time to wait for the government to help them, SJS decided to take action. Using all the levers of action, they seek to move the legal framework, make young people aware of their rights and offer legal and psychological care to victims of violence.

SJS has been one of the driving forces behind the adoption of a law on public health, including reproductive health. In the DRC, the Penal Code still punishes any woman for illegal abortion with a prison sentence of 5-10 years. Last year, as part of the review of a proposed public health law, SJS took the initiative to coordinate a network of women’s associations to promote sexual and reproductive health provisions, including abortion and post-abortion care.

While the DRC has not formally decriminalised abortion, this political advocacy work has led to the adoption and formal registration of the Maputo Protocol – a radical turning point for women’s rights in Congo.

The advocacy work by SJS has also reached healthcare providers, who have been sensitised to the importance of providing quality care without stigmatisation of women. SJS has also worked to educate young women about their rights and how to exercise them, and the means available to them… To this end, SJS has organized workshops and developed online projects. Last year, the association estimates that it has sensitized more than 5,000 people. Those who needed it could be referred to appropriate health structures.

Finally, SJS offers direct support services where public authorities are lacking. It offers a legal support service for the LGBTIQ population victims of violence or injustice or arbitrary incarceration related to their gender or sexual orientation… in a country where the rights of sexual minorities are still poorly recognised.

From 2014 to 2017, SJS also provided free psychological care services for women and young women in need and victims of sexual violence. But this service was interrupted due to lack of means. SJS hopes to revive it next year, thanks to your donations.

In the face of the unacceptable criminalisation of women, the patient work of associations such as Si Jeunesse Savait is invaluable.