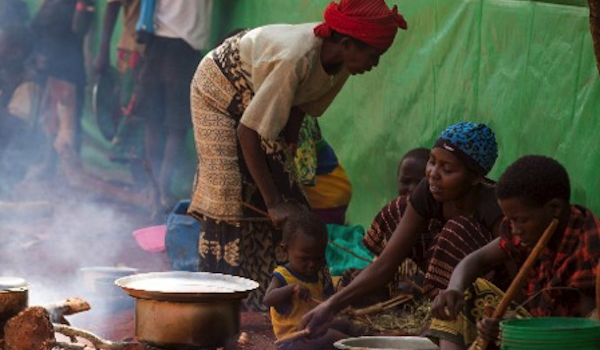 In May 2016, Human Rights Watch interviewed more than 70 rape victims in the Nduta refugee camp in western Tanzania, one of three Tanzanian camps sheltering 140,000 Burundian refugees.

Dozens of women said they were raped in or close to their homes in Burundi. Many fled Burundi immediately afterwards, before they were able to get emergency medical services. Human Rights Watch found that in many cases women were not identified as rape victims when they arrived at humanitarian transit camps on the Tanzanian side of the border and so did not get emergency care for HIV exposure or emergency contraception, which are among World Health Organization minimum standards for post-rape care.

Human Rights Watch wrote to the president of the ruling party, Pascal Nyabenda, on 12 July 2016, seeking his response to allegations of rape by the security force, but did not receive a reply.

One woman who did not receive emergency care became pregnant from the rape. Another found out later she was HIV positive. Both said there was no obvious way to report the rapes at the transit camps. Humanitarians told Human Rights Watch that they were continuing to train staff at the border points, had stockpiled drugs at the border, and were trying to increase the number of female staff there, to encourage women to report sexual violence.

In refugee camps, the numbers of rapes are also alarmingly high, including of children. Women and girls have been raped both inside the camps and in areas outside where they collect firewood or goods for market, often as many as three or four cases a week. Women said the attackers included other Burundian refugees and Tanzanians. Humanitarians told Human Rights Watch they are concerned about high numbers of rapes of children.

Victims said that aid groups providing services in the camps do not provide adequate psychological services and trauma care. The Office of the United Nations High Commissioner for Refugees (UNHCR) reported that donor countries have provided less than 40 percent of funds requested in aid to Burundi refugees in Tanzania.

UNHCR funds Tanzanian police in the refugee camps. The police station in Nduta camp is staffed by least three female police who work at a “gender desk” that encourages women to report abuse. Several interviewees said they appreciated efforts by Tanzanian police, including detaining alleged perpetrators, although sometimes only for short periods.

In other cases, however, women said the Tanzanian police did not seem interested in finding those responsible if the women had been attacked outside Nduta camp, or had not seriously tried to arrest attackers in the camp. A legal assistance organization, the Women’s Legal Aid Center, which works in Nduta, said that five people have been officially charged with rape since Nduta opened in October. Four were found not guilty, and one case was ongoing in late May. There have been two convictions for domestic violence.

Abortion services are only legally available in Tanzania to save a woman’s life. This highly restrictive law means that women pregnant as a result of rape are forced to have the children. Medical service providers should use the ban’s exception to the greatest extent possible and should consider whether a woman choosing a dangerous illegal abortion or committing suicide as a result presents a risk to life.