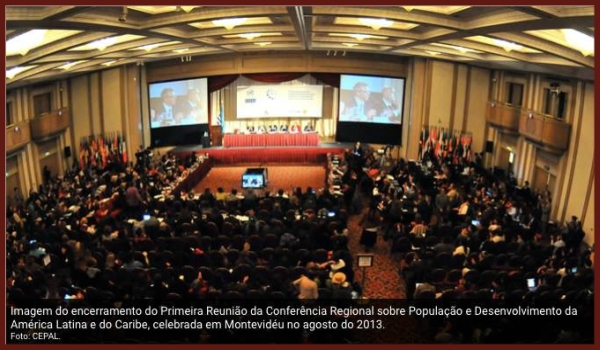 This letter was read out at the closing session of the Special Meeting of the Presiding Officers of the Regional Conference on Population and Development in Latin America and the Caribbean, held at Santiago (Chile), on November 9, 2017.

Good afternoon to all,

Activists and members of civil society who are gathered at the Special Meeting of the Presiding Officers of the Regional Conference on Population and Development in Latin America and the Caribbean in the city of Santiago, Chile from 7-9 November 2017, denounce the threat to sexual and reproductive rights currently taking place in Brazil.

In the afternoon of Wednesday, 8 November, a Special Commission of the Brazilian Chamber of Deputies approved, by 18 votes to 1 (18 men to 1 woman), an Amendment to the Constitution No. 181/2015, which would recognize the right to life from conception, thus ending the established right to safe and legal abortion on three grounds in Brazil – risk to the woman’s life, rape, and anencephaly in the fetus.

The next step for this bill will be to go to the full Chamber of Deputies and then to the Senate. Originally, Amendment No. 181/2015 was intended to allow women a longer time for maternity leave in the event of a preterm birth. Now, however, it has been changed to become a platform for completely criminalizing abortion in Brazil.

This legislative proposal is in direct contradiction to the Montevideo Consensus, adopted at the 2013 Latin American & Caribbean Regional Conference on Population and Development (photo above), which reaffirmed reproductive and sexual rights and rejected punitive laws that restrict voluntary termination of unwanted pregnancy and that impact negatively on women’s health and rights.

The United Nations Population Fund (UNFPA), in its latest report “Distant Worlds”, shows the precariousness of the reproductive life of Brazilian women, especially the poorest women. These women are the majority in Brazil, 4.2 million Brazilians, who, even after decades of investment, still do not have access to contraceptives during their reproductive years. Among these, young women are the most vulnerable: 20% of mothers in Brazil are under 20 years of age.

The National Abortion Survey (ANP) of the Anis-Bioethics Institute, published at the end of 2016, shows that in 2015 alone, more than half a million women in Brazil had an abortion, and included among them are religious women whose churches reject abortion. In Brazil, every 11 minutes a woman is a victim of rape, according to a study released by the World Bank in 2016, a study which also recognizes the under-reporting of cases. That makes 130 women a day, almost 50,000 women a year. In addition, Brazilian women are always presented with new issues that threaten their most basic right, the right to life, with illegal and unsafe procedures, and also in the case of the Zika virus epidemic, in which women were prohibited from having an abortion, leaving them unsupported during a risky gestation and facing a life full of challenges. What will Brazil do with all these women if it ends the possibility of legal abortion?

Women should have the right to decide over their own bodies, their health and their lives with the full support of the country. Laws should provide them with safe solutions and not with punishment because of issues that the State deems wrong or of problems that the State is not able to solve. We cannot and do not accept this amendment. These rights, which were so hard won, cannot be reversed. Their loss would put the lives of women in danger.

In the name of the recently deceased feminist, Fátima Oliveira, activist for women’s reproductive rights and for the health of women of Afro descent, and in the name of each and every woman, we tell the Government, the Chamber of Deputies, the Senate and the Federal Supreme Court of Brazil: we will not give up this battle!

We, more than 50 organizations and their representatives, sign this letter to show our commitment and our solidarity to Brazilian women. #NotOneLess #WeWantUsAlive We refuse religious extremism!

-Continental Network of Indigenous Women of the Americas (ECMIA)

-Soledad Reza – Catholics for the Right to Decide (Argentina)

-Aidé García – Catholics for the Right to Decide (México)

-Citizen Group for the Depenalization of Abortion (El Salvador)

And follow the news about the processing of the Amendment here: http://sxpolitics.org/compilation-about-amendment-no-1812015-the-right-to-abortion-in-brazil/17817