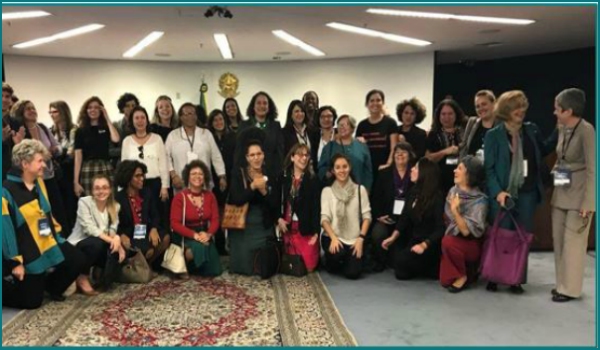 On 1 August, we shared a press release from Anis-Institute of Bioethics announcing the hearing in the Supreme Court on abortion on 3 & 6 August and the festival for women’s lives on 3-6 August in Brazil. Below are translations of two articles we found on the web and a few of the photographs we have received from colleagues so far. We hope to share further reports later this week.

On 3 August, the first day of the hearing, there were 26 speakers, 20 of whom supported decriminalisation and six against. Those who spoke in support included Debora Diniz of Anis-Institute of Bioethics, and international human rights experts such as Rebecca Cook, of University of Toronto in Canada, Françoise Girard, president of the International Women’s Health Coalition in New York, and Veronica Undurraga, who defended the constitutionality of the new abortion law in Chile in hearings of their Supreme Court last year. [We hope to receive more information about this day’s presenters and presentations later this week. Editor]

The individuals and religious representatives scheduled to speak on 6 August were expected to have similar anti-abortion positions, but in fact there was no consensus among them. Of the 11 speakers, seven were against abortion, two were in favour and two had no clear, defined position.

Among those opposed to decriminalisation were leaders of Catholic and Evangelical churches and lawyers from Christian associations who defended the principle of “inviolability of life from conception” and argued that the Court had no competence to change the Penal Code’s prohibition of abortion. Words like ‘genocide’ and ‘murder’ were used. The government was urged to find alternatives to abortion, such as religious shelters for pregnant women.

Among the speakers on 6 August who favoured the decriminalisation of abortion were Maria Jose Rosado, the director of Catholics for the Right to Decide, and Lutheran Pastor Lusmarina Campos Garcia of the Institute for Religion Studies. Both defended the autonomy of women and the separation between church and State.

Maria José Rosado pointed out that many Catholics practise abortion and that the poorest women suffer the most from it being clandestine. “We cannot continue to close our eyes to this reality. The Constitution must be fulfilled and religion must accept and not judge,” she said.

Lusmarina Campos Garcia said: “Secularity is fundamental to equality. The state cannot confuse criminal law with what is considered sin. In any case, the Bible does not condemn abortion. The most important argument of religions against abortion is the ‘thou shalt not kill’ commandment, but it is not universally applicable… The linking of abortion to this commandment is a manipulation of the biblical text.”

Outside the Court, before the hearing began, groups opposed to and supporting the decriminalisation of abortion gathered outside the Supreme Court. In the queue for entry into the Court, some people were praying “for the right to life” while feminist groups carried placards about the deaths of women in clandestine abortions and male abandonment of women they had made pregnant.

A moment of hostility occurred at the arrival of the lawyer and professor at the Law School of the University of Sao Paulo, Janaína Paschoal, one of the speakers at the hearing, who was one of the authors of the impeachment of former President Dilma Rousseff. She was greeted with boos and shouts of “coup”.

Judge Rosa Weber, rapporteur, is tasked with scheduling the date for the hearing on ADPF 442. 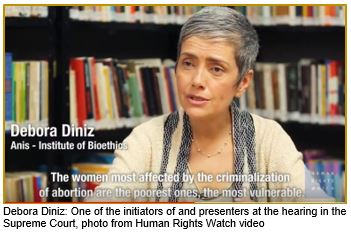 A candidate who ignores abortion cannot be taken seriously

A candidate for the presidency of the Republic [national elections are scheduled for October] who ignores the abortion question cannot be taken seriously. You do not have to be a feminist to recognise the seriousness of the clandestine effects of abortion in Brazil – just learn two numbers: half a million women have an abortion every year and abortion is the third leading cause of death in young, healthy women. Due to the urgency of the topic, the arguments against having a public debate are unacceptable. It is not worth appealing to religion or the candidate’s personal beliefs, because abortion is not a matter of for or against, or respect for this or that religion. We live, until the rules of the game are changed, in a secular country, that is, our rulers must separate religious beliefs from political responsibility. And the leaders of the state are respected only if they protect individual choices about how people regulate their lives. We therefore want to know how each candidate understands the issue of abortion as a public health issue, an issue of fundamental rights and a criminal policy.

Various entities clashed with each other, putting opposing arguments for and against abortion on [6 August], the morning of the second day of the public hearing on the decriminalisation of the practice in the Supreme Court. Churches and Christian lawyers have criticised the Supreme Court’s decision to deliberate on the matter, on the grounds that this should be a subject for the Legislature.

Unfortunately, during this election period, abortion seems to have been made a subject for embarrassment, intimidation and even hate speech. Serious candidates have decided to be silent as a form of protection against religious intimidation. Populist candidates emotionally present themselves as defenders of family, morals and religion and proudly claim “to be against abortion”. But since when should politicians claim to be against or in favour of public health policies? We expect reasonable, science-based arguments to answer the question of why women are sent to prison when they have an abortion. This is an urgent conversation for the country with ADPF 442 in process in the Supreme Court, which seeks the decriminalisation of abortion up to 12 weeks of gestation.

The Court decided to hold a public hearing as its first step in hearing the case on the 3rd and 6th of August. There were 40 invited experts, including scientists, researchers, lawyers, faith leaders and social movements, who were asked to present their reasons to help to guide the Court’s decision on the decriminalisation of abortion. Coming two months before the election, the hearings also have the role of affecting the public debate about how we will talk about abortion. That is the lesson: we need to discuss abortion during the election period, but we must do it without moral intimidation or religious stigmatisation. As it is an issue of women going to prison, we need to know the arguments of those who hope to double the Brazilian prison population every year with only women in the prisons. If it is a public health issue, we need to understand how the decriminalisation of abortion has reduced complications of unsafe abortion in other countries.

What we cannot accept is that there are “prohibited topics” during the electoral debate. Abortion, as well as issues such as decriminalisation of marijuana and same-sex marriage are some of these issues. If, in the political debate on these issues, the intention is to intimidate anyone who does support the populism of “my faith” or “my personal beliefs”, and serious candidates make a risk calculation leading to their silence on these issues, the result is a perverse populist manipulation of emotions. The overlap between the silence of some and the proselytising of others makes abortion the object of hate speech on social networks. Meanwhile, one woman every minute has an abortion in Brazil, according to data from the Ministry of Health’s National Abortion Survey of 2016.

We live in a world region with a high rate of abortions and which punishes women for abortions more than others. Clandestine abortion rates in Latin America and the Caribbean are higher than in Africa. Women abort using drugs of unknown origin, and high-risk methods such as the insertion of castor bean stems in their uteruses, as did Ingriane Barbosa, who died a few weeks ago after intense agony. Confessions of faith by politicians will not bring back Ingriane’s life nor prevent other girls and women from having to use unsafe methods for abortion. Recognising that abortion is a fact of the reproductive life of women does not mean being for or against abortion, or for or against religion. It is to be an honest and transparent candidate standing for the reality of women’s lives, in particular the most impoverished women, such as young women, women from the northeast of the country and black women. It is to be a candidate who respects the political process and does not bow to the odious inquisition. 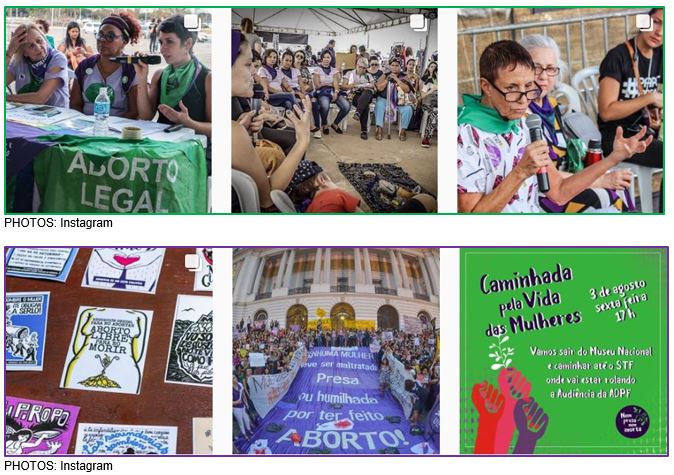 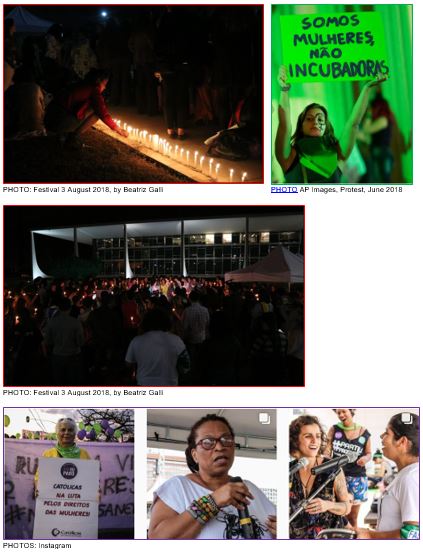 More photos: for even more photos from the festival, including posters and entertainers, speakers and activists’ faces, go to this Facebook page!! Or for a small selection try Instagram.

Human Rights Watch published a video in the days leading up to the hearings: