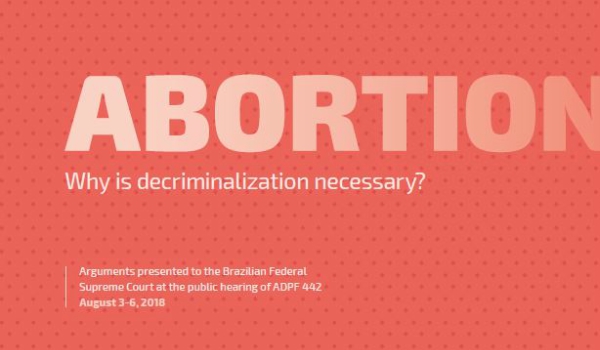 On 3-6 August 2018, Brazil’s Supreme Court held a public hearing on ADPF 442, the petition to decriminalise abortion in the first trimester. The Anis Bioethical Institute has now published an outlines of the many arguments presented at the hearing in clear, accessible language, grounded in public health, bioethics, international law, social sciences, and the role of religions in a secular state. The evidence is indispensable to any serious debate about health policy on abortion.

The publication is divided into seven themes that demonstrate that criminalisation is ineffective – not only because it does not prevent abortions but, worse, because it kills and harms women. In addition, it shows that criminalisation is discriminatory in that the risks of unsafe abortion fall disproportionately on Black and Indigenous women, and women who live in marginalised communities.

Criminalisation has not reduced the number of abortions anywhere in the world; on the contrary, there is evidence from several countries that abortion rates actually decrease in the years following decriminalisation.

The report is available here. It is in English, Spanish and Portuguese, so that it will be useful to others in the region for their advocacy strategies. It shows that abortion is healthcare.