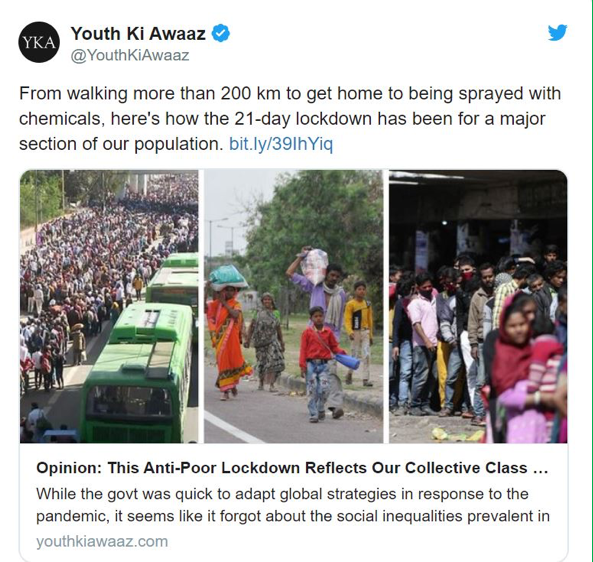 We are a country in which a large population do not have the privileges of food, health and shelter. In such a country, what does lockdown mean? On 3 April, Arundhati Roy gave apt and powerful expression in the Financial Times to what is happening in India because of the Covid-19 lockdown, in which she calls the pandemic a portal. I will quote only a small part of what she wrote here. It opens:

“Who can use the term “gone viral” now without shuddering a little? Who can look at anything any more – a door handle, a cardboard carton, a bag of vegetables – without imagining it swarming with those unseeable, undead, unliving blobs dotted with suction pads waiting to fasten themselves on to our lungs?

Who can think of kissing a stranger, jumping on to a bus or sending their child to school without feeling real fear? Who can think of ordinary pleasure and not assess its risk? Who among us is not a quack epidemiologist, virologist, statistician and prophet? Which scientist or doctor is not secretly praying for a miracle? Which priest is not – secretly, at least – submitting to science?

It continues: “The tragedy is immediate, real, epic and unfolding before our eyes. But it isn’t new. It is the wreckage of a train that has been careening down the track for years….”

It ends:“Whatever it is, coronavirus has made the mighty kneel and brought the world to a halt like nothing else could. Our minds are still racing back and forth, longing for a return to “normality”, trying to stitch our future to our past and refusing to acknowledge the rupture. But the rupture exists. And in the midst of this terrible despair, it offers us a chance to rethink the doomsday machine we have built for ourselves. Nothing could be worse than a return to normality.

“Historically, pandemics have forced humans to break with the past and imagine their world anew. This one is no different. It is a portal, a gateway between one world and the next.

“We can choose to walk through it, dragging the carcasses of our prejudice and hatred, our avarice, our data banks and dead ideas, our dead rivers and smoky skies behind us. Or we can walk through lightly, with little luggage, ready to imagine another world. And ready to fight for it.”

Our Prime Minister, Narendra Modi, announced the world’s largest lockdown on 24 March, asking 1.3 billion Indians to stay home for 21 days to slow the spread of Covid-19, giving us only a few hours to prepare. Now we are told the lockdown will be extended till 30 April 2020.

As the days have unfolded, what has this lockdown meant for this country, a country of migrants and poor people. As per the Census 2011 data, the total number of internal migrants in the country (accounting for inter-state and intra-state movement) was 139 million. The World Poverty Clock has reported that at least 70.6 million Indians live in extreme poverty.

Images of hundreds of thousands of Indian migrant workers trudging for miles and miles on highways have been flooding newspapers and television screens for days, reported the Diplomat on 1 April. Luggage perched on their heads, babies in arms, and elderly struggling alongside, migrants began fleeing en masse to their native villages to try to beat the lockdown. With the media and civil society raising a hue and cry, buses were finally arranged to take them back to their villages. State governments, meanwhile, are scrambling, often in partnership with local communities, to provide rations and shelter for these now suddenly visible migrants. But why weren’t night shelters, community kitchens, public toilets, and free food – the basics services required of any government – put in place for the poor before the lockdown was announced?

Dharavi, in Mumbai, is the largest slum in Asia. Due to the lockdown and forced quarantine, thousands have lost their jobs. They now stand in queues for hours for free food packets, which Government says will be available for three months, yet there is no strategy for how to sustain them beyond that. With the massive loss of jobs, slum dwellers will slip further into extreme poverty.

A key strategy for managing Covid-19 is mitigating community transmission via awareness and preventive methods, for which the preparedness of frontline workers is critical. The Accredited Social Health Activists (ASHA), Auxiliary Nurse Midwives (ANM) and others are the frontline workers in India. A survey to find the gaps in the services they provide showed that routine service delivery has been negatively affected and largely paused, risking severe adverse secondary consequences. This is because of guidelines against group gatherings (leading to cancellation of routine immunisation), challenges of travel (making it hard for women to attend facilities to give birth), unwillingness of frontline workers to accompany women to facilities to give birth, supply chain disruption (distribution of resources for take-home rations is suspended), and unwillingness of community members to let frontline workers visit them in their homes because the health workers have no protective clothing.

An example of the changes in routine service delivery was described in Rajasthan, where an ASHA reported that the medical officer called her in the morning while she was working on the farm, and she had to leave everything to accompany the ANM to another village (not her own).  She couldn’t do any housework either. All her regular ASHA work in her own village, such as immunisation, is currently suspended. A mother came to her for paracetamol for her child’s fever, and she had to refer her to the primary health centre because she had run out of medicines.

In Pune,the immunisation programme is spread over 49 dispensaries, 19 maternity homes and 2 hospitals.It covers tuberculosis, hepatitis, polio, diphtheria, tetanus, pertussis, measles, rubella and rota virus, amongst others. In the recent past, large numbers of people came for vaccination, but with lockdown and virus scare, this has slowed to a trickle. Parents are also not bringing their children for routine vaccinations for diseases such as measles and poliothat have been under control for many years. These children will be vulnerable to these diseases later in life. It will be difficult to maintain details of these missed children because Covid-19 is now the only priority for frontline workers.

For women, routine antenatal check-ups have been paused and pregnant women who need antenatal care are unsure whether to attend a clinic. Women in labour will not be able to reach institutions for delivery due to lack of transportation. Women in abusive relationships are trapped at home during the lockdown, with little or no chance of escape. Lastly, in spite of the recent abortion law reform, safe abortion provision has taken a backseat at this time. Yet the ban on ultrasound scans for sex determination has been suspended until 30 June, for reasons that are unclear. Access to safe abortion, always a difficult service to obtain, is likely to encounter further barriers.