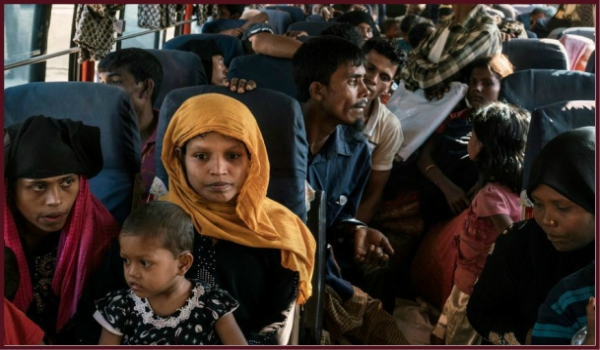 Rahima’s father never wanted her out of his sight. She and her sister were too young, too pretty, too vulnerable to be trusted among the men of her village in western Myanmar, not to mention the soldiers who roamed the region. “My father would beat us if we dared to go out by ourselves, or he’d beat our mother for allowing us to go out,” said Rahima, 15 years old. “He used to say there were bad men everywhere, and it was his duty to protect us.” But there was no protection in September, when Myanmar troops burned their village in Rakhine State and sent them running for their lives. Her mother’s throat was cut by a Buddhist vigilante, and Rahima also lost her sister. As she ran through a forest on the way to Bangladesh, three uniformed Myanmar soldiers grabbed her, and for two nights, raped her, smoking methamphetamine to sustain the torture. Today, she lives alone in Kutupalong, the world’s largest refugee settlement, in southeastern Bangladesh that has taken in more than 655,000 Rohingya since late August.

Gang rape is common but the current campaign of gang rape against the Rohingya has been so brutal and systematic that Pramila Patten, a United Nations special representative on sexual violence in conflict, deemed it “a calculated tool of terror aimed at the extermination and removal of the Rohingya as a group.” Yet Myanmar’s government has denied any instances of sexual assault.

Meanwhile, so many men have been killed that single mothers now head 17% of Rohingya households in the refugee camps in Bangladesh, according to the office of the United Nations High Commissioner for Refugees (UNHCR). And with the systematic campaign of rape in Myanmar, women and girls are arriving in Bangladesh pregnant.

Certain clinics report that they have quietly performed abortions, particularly for girls. But some clinics require consent from adult relatives before performing any procedures, and girls are often too embarrassed or ignorant to ask for help.

For Rohingya women, who rarely left their rural homes because of religious traditions, the density of the refugee camps can be disorienting. “In certain parts of the camps, you have 90,000 people living in one square kilometre, which means a complete lack of physical access to privacy,” said a UNHCR spokesman. “We’ve heard of women who are avoiding eating because they feel they don’t have proper access to toilets. At the same time, women feel vulnerable about going alone to a forest to collect firewood, especially if they are dealing with the trauma of sexual violence.” Violence that also takes place in the refugee camps.

Another Rohingya woman, who grew up in a refugee camp, part of an earlier wave of Rohingya who escaped to Bangladesh, married when she was 12. Her husband beat and raped her, she said. A son was born, but when he was two months old, her husband left her for another wife. To survive, she sells sex. Her customers aren’t violent, for which she is grateful, but they also refuse to use condoms. On a good day, she can earn $25. “Everyone has their self-respect, and no one will sell their body willingly,” she said. “I’m doing all this for my son. I am lucky because he is not a girl.”