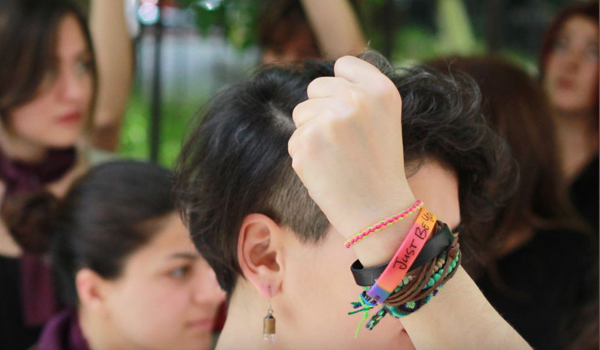 The Women’s Resource Center in Armenia is facing legal prosecution after months of receiving threats from Armenian nationalists and far-right movements. The organisation issued the following open letter explaining the situation:

“Enough! A call to action to protect women human rights defenders and stop legal pressures against the Women’s Resource Center and the Sexual Assault Crisis Center in Armenia”

We, women human rights defenders of the Women’s Resource Center and the Sexual Assault Crisis Center have been working since 2003 to protect and support women and girls survivors of gender-based violence including sexual assault, often in very hostile reality. We contributed immensely in raising awareness on women’s reproductive and sexual health and rights, combatting different stereotypes and practices putting women’s rights, well-being and safety in danger.

Over the years, we have added our strong voices, leadership and collective actions to strengthen democratic efforts and movements in society where human rights, rule of law and equality are core values.

Today after the velvet revolution, despite the many positive developments, we are facing a climate of increasing repression, hate speech and violence from extremist and nationalist groups as well as impunity despite public calls from the new state representatives to create a democratic, non-violent society where all are equal and protected. Some members of these groups started their attacks on us back in 2013 and more joined after the revolution. Among them are fervent supporters of the former oligarchic corrupt regime.

For the past year, a smear campaign on social media was launched against our founder Lara Aharonian, full of hate speech, threats and call for violence. Although a criminal case was initiated to investigate the events, later on the case was suspended. We insist that the investigation was ineffective. Earlier during the year, a book launch event on prevention of sexual assault against children in one of the local bookstores, “Bookinist” was attacked by a group of nationalists, who took over the space, disrupted the event by throwing eggs on the organizers from the Sexual Assault Crisis Center and insulting them publicly. Again, despite a report to the police, no case was initiated and no one was held accountable. Following this event, another public library cancelled a similar event hosted by the Sexual Assault Crisis Center, fearing the same kind of attacks on their premises.

Not only are most of our attempts to gain justice through legal processes often met with indifference and impunity, but recently, a legal criminal case was initiated against us by order of the Prosecutor General’s office, following pressures from the same extremist groups. It stated that our sexual education website serakanutyun.org, prepared by a group of experts in the field for parents and teenagers, is spreading pornographic materials.

Our website is presently under investigation. This is another clear attempt to put pressure on us and disturb our work. It is an effort to limit our freedom of expression, and our right to association and assembly. Initiation of criminal proceedings is used as a legal tool to limit our activities that are sensitive and silence us. We feel that this kind of approach and the impunity around these actions by law enforcement bodies are a clear attack on our organisation and a threat to civil society and democracy overall.

We urge the authorities to live up to their obligations and responsibilities to reinforce protection mechanisms for women human rights defenders like Lara Aharonian and the collective of the Women’s Resource Center and the Sexual Assault Crisis Center, ensure that all forms of hate, attacks, threats and discrimination towards us and our organisations are duly investigated and prosecuted, and that legal tools are not used to silence and limit our work for human rights and equality.

We also urge the international human rights community and agencies to monitor closely the situation and remind the government of Armenia of its international obligations.

SOURCE: Women’s Resource Center, in: Astra Bulletin on Sexual and Reproductive Health and Rights; No. 9(188), 2019 ; PHOTO