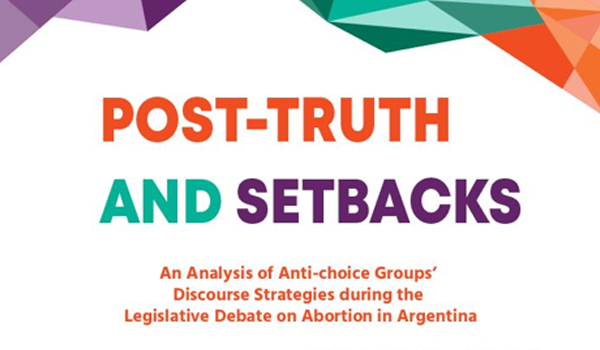 Post-Truth and Setbacks: An Analysis of Anti-Choice Groups’ Discourse Strategies during the Legislative Debate on Abortion in Argentina

In 2018, Argentina underwent a historical debate on the right to abortion. Over a period of three months, 845 speakers both for and against legalization expressed their opinions and presented their knowledge at the committees’ plenary sessions of the Chamber of Deputies and Senate, and 235 legislators expressed their conclusions during the voting sessions in those Chambers. Despite the Senate’s rejection of the Bill, over a year after the debate the social interest and mobilization that resulted still persist. However, together with the “green wave” and the social decriminalization of abortion, some conservative and even reactionary demands and anti-choice movements appeared and gained visibility both in Argentina and throughout the region. In order for us to act against those anti-choice groups in a coordinated and organized manner, we must know their strategies and arguments. This document compiles their discourse strategies during the legislative debate that took place in Argentina between April and August 2018. We hope it will contribute to the social and legislative debates in Latin America and to the continued growth of the “green wave.”

This publication provides a profile of the anti-abortion speakers, the traditional anti-choice arguments they used, their use of human rights language, appropriation of pro-choice arguments, storytelling (between fake empathy and morbid fascination), questioning the numbers of abortions and abortion deaths, use of alternative “scientific” sources, discrediting international bodies and funding of pro-choice groups, and using negative “winning” arguments.

SEE ALSO: From Clandestinity to Congress – An Analysis of the Voluntary Termination of Pregnancy Legislative Debate in Argentina, December 2019

And these and all REDAAS reports from 2015 to date (en español) at: