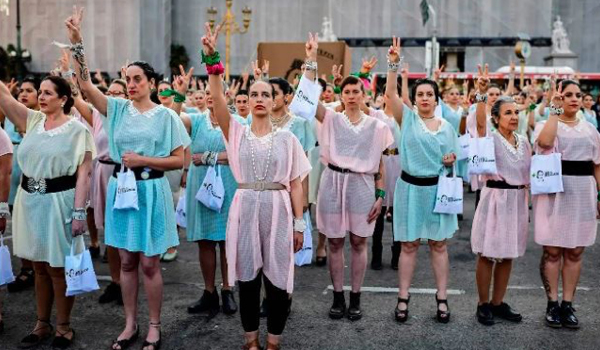 “Two weeks before Argentina’s elections, a group of female congressional candidates addressed a euphoric crowd that had travelled from across the country to the town of La Plata for a 200,000-woman weekend of feminist strategy workshops and marches,” writes Foreign Policy. The elections this month included several “outspoken feminist candidates”, while protests against gender-based killing of women, national women’s strikes, and a “campaign that saw abortion nearly legalised in the National Congress last year” amount to what is being called “the revolution of the daughters”.

But the Centre-Left candidate, Alberto Fernández, has been elected the new president of Argentina with more than the 45% of the vote needed to win. Former president Cristina Fernández de Kirchner was also elected, as his vice-president. The election was dominated by economic concerns. The country is in the midst of an economic crisis that has left a third of the population in poverty. Many say things are worse now than when the conservative took the reins of power from the controversial government of Cristina Fernández de Kirchner in 2007-2015. The new president has taken more liberal positions than former president Macri on certain social issues, most notably support for decriminalising abortion. But how much support exactly?

Alberto Fernández raised the issue of abortion twice while campaigning. The first time was on 14 October, during the first presidential debate, when he said: “I will not avoid the issue of abortion, as everyone knows what I think. To continue punishing women only criminalises the behaviour and makes it go underground. We must move to legalisation, because with legalisation we will give poor women the opportunity to have an abortion under aseptic conditions, as rich women already do in private clinics. Let’s end the hypocrisy.” Then in the week before the vote, in a radio interview, he said: “Abortions are clandestine. It is a matter of public health and it must be resolved. We cannot continue being hypocrites; once and for all, we must stop putting the lives of young women at risk.”

But will he take legislative action any time soon, when he has a failing economy to rescue? While campaigning, he sought support from many different groups. Now that he has been elected, will he make safe abortion a priority? Mrs Fernández de Kirchner, whose support was important for his victory, always refused to touch the subject of abortion during her presidency, Moreover, during the transition period to the new government, two of the four people the new president has already appointed are said to be very close to the Pope.

The Campaña Nacional por el Derecho al Aborto Legal, Seguro y Gratuito (National Campaign for the Right to Legal, Safe, Free Abortion) plan to re-launch their call for law reform in 2020 at the legislative level. So Mr Fernández will not be able to forget what he said…