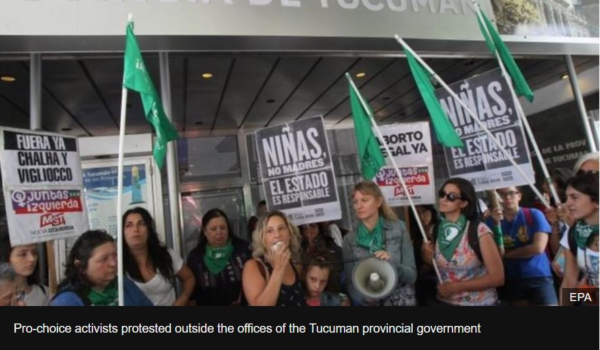 In light of what happened in the past month in relation to the request for a legal termination of pregnancy by a girl and her mother due to rape of the girl in the province of Tucumán, Argentina, we condemn the procrastination and systemic delays imposed on this girl by various government agencies, who were responsible for her welfare. The consequence was that she was prevented from having a legal abortion, even though it had been requested it in a timely and clear manner.

The unnecessary intervention of the courts added to the deepening institutional violence that this girl was subjected to. The neglect by the health authorities, throughout the four weeks she was in hospital, was a flagrant violation of her human rights, and a form of cruel and degrading treatment, amounting to torture.

Our legislation grants anyone who is pregnant the right to a legal abortion if the pregnancy is a result of rape or constitutes a risk to their health or life. The Supreme Court of Justice emphasised in the FAL case (2012) that any woman, competent or disabled, who has been raped may seek an abortion without criminal liability and without any court authorisation.

The girl arrived at the health system 4 weeks ago requesting the legal termination of the pregnancy. She was hospitalised, not to guarantee her rights and respect her will in a context of comprehensive protection and confidentiality, but to subject her to the systematic and constant violation of her rights. Both the mother and professional and civil society organisations have demanded throughout those weeks that a legal termination of her pregnancy be guaranteed – because she was raped, because of the risk to her health and even the risk to her life of continuing the pregnancy.

In spite of this, the Secretary of Health of Tucumán province, Gustavo Vigliocco, declared to the media: “I am on top of this case in a personal way. I have a closeness with the girl and her mother. The girl wants to continue with her pregnancy. We considered the risks, but she is big in build, she weighs more than 50 kilos.” Worse, he claimed: “I cannot make any decision. I’m the Health Secretary. It’s not up to me to decide. There is an error in what is being published because the case is in the courts.” This is a public official who ignored the current legal framework and the responsibilities arising from it.

On Tuesday, 26 February, the Tucumán government published a statement which said they were taking “the necessary steps in order to save the two lives”. However, “two lives were not saved”. A girl was forced to continue an unwanted pregnancy following rape, putting her health at risk, subjecting her to torture and ignoring the basic principles and standards of bioethics and the international framework of human rights.

The irresponsible four-week delay, which was not resolved, led to an increasingly trapped situation. The therapeutic alternatives were reduced, all the time aggravating the girl’s physical and emotional condition. In this situation, without access to adequate medical technology or the support and legitimisation on the part of the authorities, the health team was forced to end the pregnancy in a way that was far below the accepted standards.

Everything that can go wrong happened to this girl. A situation of complete vulnerability, sexual abuse, her life history and her health commented upon by public officials, adding to the violation of professional confidentiality, and amplified by the media. And then, at the end, after weeks of delay, a health system that could not do what had been asked of them, that is, to provide a legal abortion with the full protection of the law that she deserved.

We demand the following:

Further information related to this case

“According to the Supreme Court decision [in FAL (2012)], there is no justification for requiring a raped woman to obtain a court authorisation for a medical procedure; doing so places an extra burden on the woman when she is only requesting an abortion that is already authorised by law. Compliance with the law is a professional duty, the Court stated, and its violation may be subject to legal sanctions. This applies when a physician refuses, without any reason for such refusal, to verify the exceptional grounds that allow legal abortions under article 86 of the Criminal Code.” Argentina: Supreme Court Decision on Abortion. Global Legal Monitor, Law Library of Congress, by Graziela Rodriguez-Ferrand, 16 March 2013.

The Archbishop of Tucumán gave the girl’s real name to the media and called for the fetus to be protected. In 2018, he had publicly put pressure on provincial deputies and senators to vote against the bill legalising abortion.

Tucumán Family Court Judge Valeria Brand called on the hospital to carry out the abortion “according to the petition of the girl and her mother” and to “enforce the 2012 Supreme Court ruling, which would enable the pregnancy to be terminated”. On the evening of 27 February, however, the Health Secretary of Tucumán said the judge had talked about “ensuring that the necessary procedure to save the two lives is carried out”.

Judge Brand, however, said she had never said anything about “saving two lives”. She stated that the 2012 judgment was clear and that the Supreme Court had urged all three branches of government to comply with providing legal abortions, and in particular, that the judiciary should not intervene in these cases.

In response to the provincial Health Secretary’s statement, the president of the Supreme Court of Tucumán also warned that the Health Secretary had misrepresented the situation. His statement said: “[The Health Secretary] said that the FAL judgment of 2012 allowing legal termination of pregnancy to ‘attempt to save the two lives’. But this is not what was actually stated in that judgment, which does not mention any such thing.”

The girl had repeatedly asked for an abortion throughout the weeks she was kept in hospital. It is reported that she told officials: “I want this thing the old man put inside me taken out.” She experienced periods of anxiety and depression and twice tried to commit suicide. The fetus was apparently injected against the girl’s will with corticosteroids to help it to mature, according to Susana Chiarotti of CLADEM, an international women’s rights NGO. The hospital claimed the girl was attended by mental health staff throughout her stay in hospital, but Florencia Vallino, a lawyer with the human rights organisation ANDHES (Lawyers Association of Northeast Argentina) said this was not true.

The by then 24-week pregnancy was terminated on 28 February by caesarean section. The baby is not expected to live. While the surgery was being prepared, anti-right groups gathered to pray and sing outside the hospital doors.

The national Health Secretary of Argentina, Adolfo Rubenstein, condemned the views of the Tucumán government and called the rape and the delay in ending the pregnancy a tragedy. “Cases like these are now coming to light, where before they were swept under the carpet,” he said. He called for the 2012 ruling of the Supreme Court to be implemented in any and all cases to which it applied, including rape.

Florencia Vallino of ANDHES described the intimidation experienced by the girl’s mother while she was in hospital. For example: “The girl’s mother was told that if they did an abortion, they would have to ‘empty her’, that they would take away her uterus so she would not be able to have more children.”

In the end, on the evening of 26 February, two gynaecologists from the private sector had to be called in, in order to ensure that any procedure to end the pregnancy was carried out, because all the health professionals in the public hospital where the child was being held declared themselves to be “conscientious objectors”. This was announced by the hospital’s director, Elizabeth Ávila, at a press conference called by the senior staff of the provincial Health Department, with Minister Rossana Chahla and Secretary Gustavo Vigliocco in the lead.

Lastly, there is controversy over the fact that the medical team did a c-section and not a second trimester induction abortion. The two doctors said there were several reasons for this: first, the girl had high blood pressure and symptoms of pre-eclampsia, so time was of the essence. Second, she was physically very small. They did not believe it was safe for her to go through an induction abortion. Perhaps they were also under pressure from the hospital not to do an abortion, given the whole scenario. We can imagine. But having come in from outside and finally ended this pregnancy, they are now being criticised from all sides. This is a very bad ending to a story full of injustice and violation of rights. The role of medical technology is a serious aspect in cases like this, and it is an issue in many more countries than Argentina, precisely because the legal protection for abortion providers is so very, very thin.

And yet in the same country, only a week before….