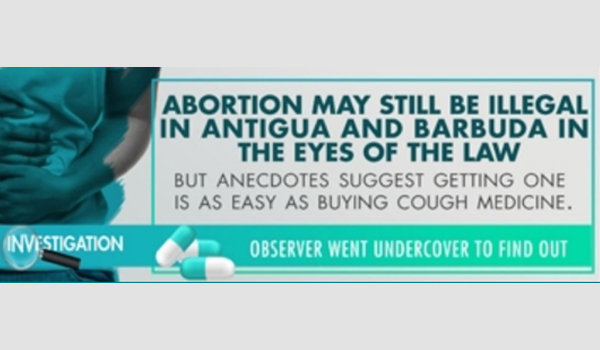 “It’s like going to the shop to buy an item,” was how one woman described the ease of getting the abortion pill at pharmacies in Antigua and Barbuda. “I was surprised at how normal it was to get this pill,” said another.

In the midst of the current debate in the country surrounding the controversial and, sometimes, taboo issue of abortion, OBSERVER media decided to mount its own investigation by visiting pharmacies to see to test how easy or difficult it was to get ‘a pill’ to terminate a pregnancy.

Public conversation has highlighted a divide in public opinion, with some denouncing abortion and others calling it a necessity for some women. Many women are moving from traditional (dangerous) abortion methods, like drinking hot Guinness, a hot Pepsi mixed with rust, or a dangerous cocktail of organic roots. Instead, recent years a large number of females have been opting to purchase the more ‘affordable pill’ and the practice is becoming commonplace.

“I therefore embarked on my personal quest to find ‘the pill’. Nervous and apprehensive, I stopped at the first pharmacy on the outskirts of town where, to my surprise the pharmacist did not shun or treat me with contempt, but rather referred me to another pharmacy. The second pharmacy, located on the other side of town, I found a very open and nonchalant pharmacist who was surprisingly conversant about the issue. “I want to know if, I can get the pill. I am in a little trouble and a friend said I could come to you for help,” I stated. “You have to be more specific, stop beating around the bushes,” the pharmacist said. “The abortion pill,” I responded.” After further relevant questions, he told her the pills would cost the equivalent of US$130 and that she had two months to decide whether to use them.

“The third pharmacy I visited, the pharmacist was very forthcoming and he seemed very concerned about my health. He asked very probing questions about my menstrual cycle, contraceptive methods used, my tolerance to strong medication and alcohol, and my general state of mind. What was more alarming than the second encounter, was when he said: “If it is early you can buy a Guinness, heat it up on the stove, put a teaspoon of black pepper in it and drink. If it doesn’t work come back to me in three days and I give you the pill. That will give you contractions and help you to push the foetus out of your body. You will”.”

And the article goes on!!!