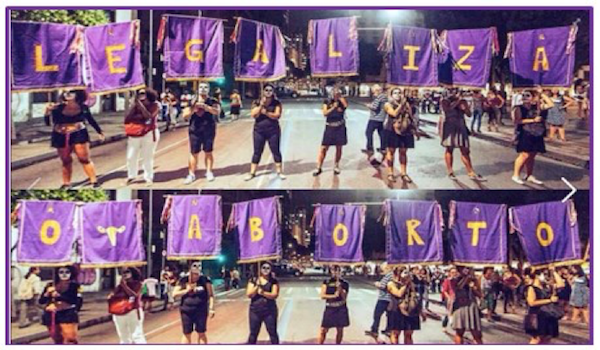 The criminalization of abortion by the 1940 Brazilian Penal Code is incompatible with women’s fundamental rights enshrined in the 1988 Federal Constitution. This premise grounds the petition presented to the Supreme Court (STF), on March 7th 2017, by the Socialism and Freedom Party (PSOL) and Anis – Institute of Bioethics. In Brazilian legal terminology this type of request is named as ADPF (Arguição de Preceito Fundamental/ Interrogation of Fundamental Principles). ADPF 442 as the petition was numbered calls for the decriminalization of abortion until the 12th week of pregnancy.

On March 27th, in Rio de Janeiro, women’s human rights experts and activists organized the first public debate to discuss the motivation and content of ADPF 442 and to assess the potential developments of the initiative. It was organized by the Brazilian Women’s Articulation (AMB Rio), the feminist NGOs Redeh, Cfemêa and Grupo Curumim in partnership with Ipas and Sexuality Policy Watch.

Minister Rosa Weber was appointed by the Court to be the Justice responsible for the processing of the case. On the same day as the public debate, she formally requested the Executive branch, the Legislative chambers and the Office of the Federal Prosecutor to express their positions on the petition request.

Luciana Boiteux, a professor of criminal law, who is a member of PSOL and one of the lawyers who signed the petition explained to the public debate that this step by the Minister was in response to the preliminary injunction attached to the petition, which requests that arrests, police inquiries, judicial proceedings and effects of judicial decision on criminal abortion cases are suspended while the case is discussed and decided by the Court (a process that can take many years). She also said::

“The role of the Supreme Court is to guarantee the rights of minorities and access to state support in certain matters. Because in the case of abortion, as in other topics around which no easily social consensus exists, a parliamentary majority is not necessarily the most democratic solution. The contradictory aspect in the case of abortion rights that we, as women, are the majority, but when we claim these rights our voices can be described as expressing a minority demand, which will not necessarily be recognized by parliaments.”

The petition also recaptures key definitions settled by Supreme Court Justices in three previous decisions: one authorizing the development of stem cell research in Brazil (2010), one granting the right to abortion in the case of anencephaly (2012) and the opinion and voting of the First Group of the Court in November 2016 when examining an Habeas Corpus request in the case of health professionals indicted for working in a clandestine abortion clinic in Rio de Janeiro….

The Federal Prosecutor for Citizenship Rights, Deborah Duprat, agreed with other panelists that time is ripe to request from the Supreme Court a juridical solution for the violations that derive from criminalisation of abortion. She also reminded everyone that because abortion is criminalised many doctors continue to refuse to do abortion in cases when it is legal (rape, to save women’s lives and anencephaly) because they fear being punished. She also suggested that when calling the attention of the Court to the tragedy of individual cases of death and detrimental health impacts related to unsafe abortion, and the arbitrary treatment or punishment suffered by women, it is important to show how these effects differ across class and racial lines. Duprat has also insisted on the premise raised by others on the panel that the right to one’s own body “is at the core of the principles of dignity, freedom and equality”.

Other speakers included Beatriz Galli of Ipas Brazil and Lúcia Xavier, who coordinates the Black feminist NGO Criola and is a member of the Brazilian Articulation of Black Women…

The results of an opinion poll on social perceptions on abortion decision, conducted by Catholics for the Right to Decide and one main poll institute (IPOBE) in mid-February 2017, were also made public. The poll showed that 64% of a representative sample considered that the decision about terminating a pregnancy is exclusively the decision of the woman; only 9% thought the decision should be shared with husbands or partners; 6% named the Judiciary as the power that should decide; 4% the churches; and merely 1% that the Presidency or the National Congress should have a voice in this matter…