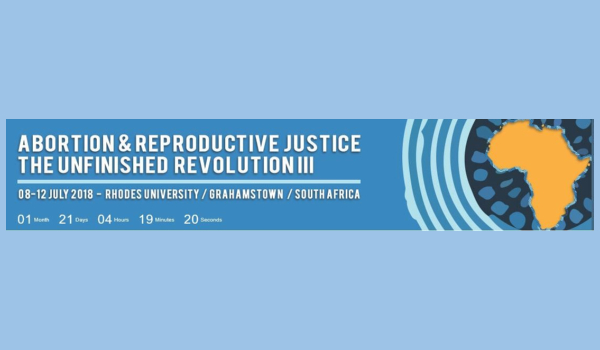 Rhodes University’s Critical Studies in Sexualities and Reproduction (CSSR) research programme will be co-hosting a flagship conference to address abortion and reproductive justice issues in July.

In cooperation with the Sexual and Reproductive Justice Coalition of South Africa, the International Campaign for Women’s Right to Safe Abortion, the South African Department of Social Development, and the Open Society Foundations, the conference – Abortion & Reproductive Justice: The Unfinished Revolution III – will take place from 8–12 July 2018 at Rhodes’ Barrat Lecture Theatre Complex.

The conference builds on two previous international conferences of the same name held in Canada in August 2014, and in Northern Ireland in July 2016.

According to Professor Catriona Macleod of CSSR at Rhodes, the aim of this third iteration is to bring the conversation to Africa, thereby enabling dialogues between those living in jurisdictions where abortion access is highly restricted, and those in countries with liberal abortion laws such as South Africa.

The event will include delegates from Burkina Faso, Benin, Uganda, Zambia, Nigeria, Malawi, Democratic Republic of the Congo, Zimbabwe, Mozambique, Madagascar, Ghana, Kenya, Mauritius, Madagascar and South Africa. Other countries represented will include Haiti, Jamaica, Venezuela, Argentina, Philippines, India, New Zealand, Australia, UK, Netherlands and USA. “The African continent has unique reproductive health challenges, and we are very pleased that the bulk of our delegates will be coming from this region,” Macleod said.

“Framing reproductive issues as injustices rather than simply health problems helps to locate understandings as well as actions within context,” Macleod explained about the urgent need for such a conference to take place. She identified reproductive injustices as connected to several issues including high maternal mortality rates, high HIV infection rates, inadequate antenatal care and significant barriers to women obtaining abortions.

“The notion of reproductive justice has been important in moving reproductive health debates forward to locate understandings within context and to highlight power relations and disparities in reproductive outcomes,” Macleod continued. “Women of colour have been central in highlighting how intersecting inequities – such as race and class – result in the disproportionate difficulties experienced by marginalised women. These inequities serve to prevent certain women from exercising their rights to safe abortion, as well as their right to continue a pregnancy and parent a child. A social justice perspective requires that inequities are addressed.”

The conference aims to increase awareness, circulate knowledge, and present workable solutions to the many pressing issues concerning reproductive injustices around the world.

Within the context of reproductive health, the conference plans to discuss and challenge health systems, abortion history, abortion politics, education, interventions and treatment, theory and methods in research, social contexts and communications, and activism and advocacy.