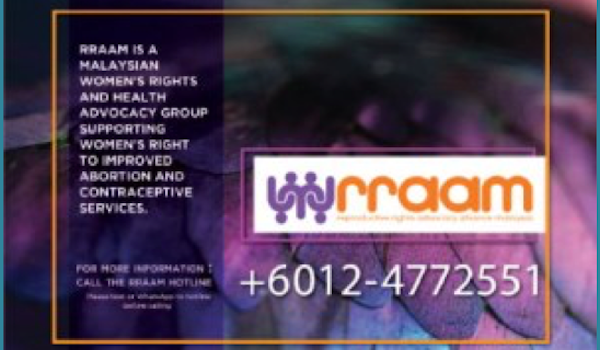 A statement by the Minister of Health of Malaysia, in which he threatened investigation and prosecution of anyone selling or purchasing medical abortion pills online, was widely reported in the press.

In response, the Reproductive Rights Advocacy Alliance Malaysia’s said: “We recognise the proliferation of many unethical sellers of medical abortion pills, but the proposed action by the Minister may also end up threatening the provision of genuine non-profit suppliers such as Women on Web, Women Help Women and Safe2Choose.

“Mifepristone has not been approved in Malaysia. But off-label use of misoprostol for medical abortion and for softening the cervix before manual vacuum aspiration abortion is common.

“Six months ago, the Ministry pressured Pfizer to stop supplying misoprostol in Malaysia, thus preventing abortion providers from using it. We are uncertain how effective  the Customs department will be, but we expect most of the supplies will still get through. But if a prosecution takes place, it will be a real threat to continuing access.”

The newspaper article, published on 16 January, was entitled: “Health Minister concerned over abortion pills”. The Minister, Datuk Seri S Subramaniam, is reported as saying that in Malaysia, these pills require a doctor’s prescription, and are for “specific purposes”. For internet sales domestically, he believed they could be detected and action taken against offenders. However, he is also quoted as saying that it is difficult to detect when orders are placed online for purchases from abroad. He said the Health Ministry was working with the Customs Department and police to detect packages containing such pills and also to establish whether the pills were being sold locally.

The article also states that misoprostol is easily available online and a common discussion topic in certain chatrooms, especially those related to “how to get a safe abortion”.

The Reproductive Rights Advocacy Alliance Malaysia’s says: “The only logical and effective step to cut out the demand for online abortion pills… is to fast-track the approval and supply of both these medications to doctors so that they can be legally prescribed to clients after a proper assessment, as proposed by the Minister.”